Need a hand with Lost Ark’s Flame Fox Yoho Guardian Raid? We break down the mechanics, tips and tricks here. 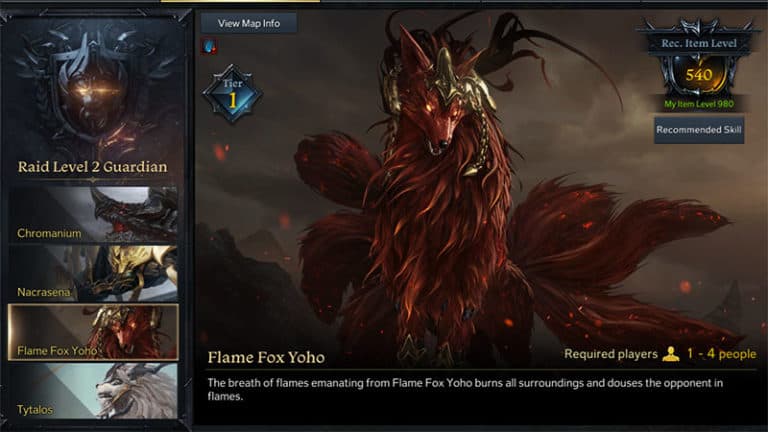 Flame Fox Yoho is Lost Ark’s seventh Guardian Raid after Chromanium and Nacrasena. This guide will tell you everything you need to know about Flame Fox Yoho, from their ability set to tips and tricks to take them down.

Guardian Raids can be attempted solo or with up to three other players, the battle is then scaled for the number of players attempting it. Everyone in your party will need to be item level 540+ to take on Flame Fox Yoho and have completed all of the previous Guardian Raids. If you need more players, you can use the find party or matchmaking features to quickly group up and take this Guardian on.

First up, we have a few general tips to help with the Lost Ark Flame Fox Yoho battle.

Orb Ring – Flame Fox Yoho surrounds itself with a ring of golden orbs that will begin to rapidly rotate around it. At the end of this effect, the player with the least health inside the ring receives the damage buff. If you play a support or tank role, move back. If you play a carry role, you will want to get in the ring.

Golden Orbs – Flame Fox Yoho again surrounds itself with a ring of golden orbs, this time larger. Smaller golden orbs will then begin to fly in random directions from both the larger orbs and Yoho itself. If you are hit by three of these orbs within a ten-second window, you will also gain the damage buff. Make sure again to use shielding or protection potions before intentionally taking hits. Coordinate with your support classes, especially a Bard for shielding or healing if you have that liberty.

Flame Cone – Flame Fox Yoho spits a cone of flame onto the ground in front of it. You will receive the damage buff if you are hit by this attack, or move into the flames on the ground to get the buff too. You will take damage and some burning stacks from this attack, so try to be in and out quickly or use those protection potions/shields.

Gathering Energy – Throughout the fight, Flame Fox Yoho will lower its body and begin to draw golden energy in, to power up. You need to stagger it during this time to prevent the fight from becoming too difficult before you have reduced its HP by enough. Use stagger abilities and whirlwind grenades when you see this happening to quickly prevent the ram up in power.

Spreading Flames – Flame Fox Yoho spins and two medium-sized circles of flame appear on the ground nearby. It will continue to use this ability and fill the area with burning patches. You can counter this ability by fighting in a small area until the ability has been used two or three times and you can no longer fight there. Then move to an unburnt area and repeat the process.

Body Slam – Flame Fox Yoho lifts its head back before jumping into the air and slamming down towards whichever player it was focussing on. Later in the fight, it will begin to chain this ability and jump towards the target up to three times.

Charge – Flame Fox Yoho leans back onto its hind legs before charging forwards in a straight line. You can dodge this by moving to the side when you see it is about to charge. Occasionally, like most Guardians, Flame Fox Yoho will glow blue when it is about to use this ability. You can hit it with a counter-attack during this glow to knock it down.

Tail Swipe – Flame Fox Yoho will turn its head to one side, before swiping its tail in that same direction. If you are at its side and see its head turn, make sure to dodge back or towards its head in order to get out of the way of this one.

Tail Slam – Flame Fox Yoho leans forward and lowers its head, then it raises its tail and quickly slams down onto the ground behind it. Move to the sides to avoid this one.

Teleport Attack – Flame Fox Yoho will leap into the air, spin and disappear leaving a large golden orb in the air. A few seconds later, it will appear somewhere else in the air and slam down on a player. You can see where the attack will be from the large red AOE circle on the ground so be ready to dodge when she disappears.

Clone Attack – Flame Fox Yoho howls before teleporting to a player. It will then do a spin attack in place and summon a clone who will repeat the attack. Later in the fight when using this attack, 4 clones will be summoned instead, one in each direction. Try to move diagonally from it after it reappears to avoid these attacks.

Fireballs – Flame Fox Yoho will either slowly walk a short distance, or howl and flaming orbs will circle its head when casting this one. Either way, a shower of fireballs will begin to fall from the sky, indicated by red AOE circles. Try to focus on dodging these fireballs, rather than focussing on damage, as they will knock you down and the stacking damage can be brutal.

This concludes the Lost Ark Flame Fox Yoho Guardian Raid Guide. Next up we have the Tytalos fight, which you are more than likely going to need help on. We hope you found it useful! If you did, why not check out our Lost Ark hub?