Need some pointers for Lost Ark’s Nacrasena Guardian Raid? We have the mechanics and tips covered here. 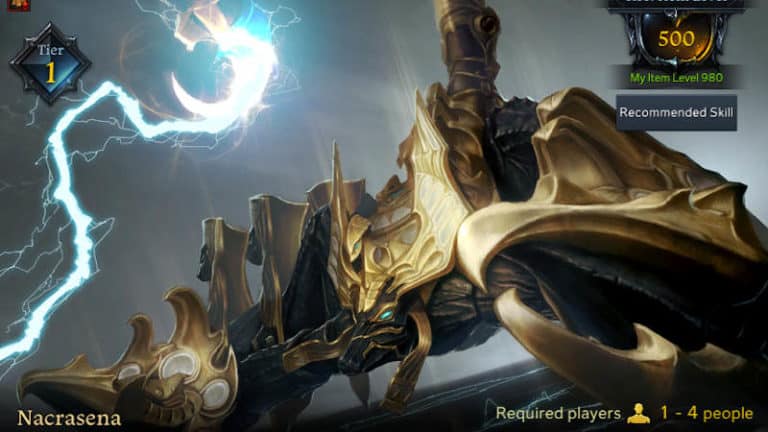 If you have completed Lost Ark’s first Level 2 Guardian Raid Chromanium, it is now time to take on Guardian #6, Nacrasena. This guide will tell you everything you need to know about Lost Ark’s Nacrasena, featuring his abilities and tips on how to defeat him.

Guardian Raids can be attempted solo or with up to 3 other players, the battle is scaled for the number of players in the party. Everyone in your party will need to be item level 500+ to take on Nacrasena. If you need more players, you can use the find party or matchmaking features to group up.

Unlike other Guardian raids like the Tytalos, there is nothing particularly noteworthy that will cause you to wipe or get significant advantages. Feel free to bring whatever classes you want in your party as this is a big damage fight. Although, since you’re going to do a lot of moving to avoid getting hit with skills, we recommend grabbing a Deathblade or Wardancer for their party movement speed buffs. It is not entirely necessary, however.

Burrow – The animation for this ability is similar to when another Guardian might change phase or move around the map. Don’t be fooled though! A dust cloud will appear above the hole Nacrasena burrowed into and will begin following a player. He will then leap from the ground and slam down onto the target. To dodge this one, you will want to run in a straight line whilst the cloud is following you, then quickly dodge to the side when he emerges.

Double Slash – Nacrasena slams his claws against the ground one after the other. Then he slashes twice in front of him. Quickly move to his side to avoid being hit.

Slash Turn – Nacrasena raises one claw up and inward, he then slashes outward and turns in that direction. You can tell which way he is going to turn by which claw he raises, get in front of or behind him to avoid this one.

Charge – Nacrasena flails his claws in the air before attacking three times and rolling in a straight line. Sometimes, he will glow blue whilst channelling this attack, hit him with a counter-attack ability during this time to stun him.

Claw Pound – This attack has a very similar starting animation to Double Slash. If Nacrasena did not slam his claws before raising them up for an attack it will be Claw Pound instead. This time Nacrasena will dash forward before pounding both claws into the ground, one after the other.

Cone Spray – Nacrasena rears back, sucking sand into his mouth. He then sprays the sand in a cone ahead of him, followed by another to the right in quick succession. Your mana will be drained if this attack hits. You should look to get behind him or move away when he begins to rear back, although it can be a tricky one to dodge.

Body Slam – Nacrasena raises both claws, crossing them above his head. He then leaps into the air and slams back down on the spot. This one is quite telegraphed so make sure to move away when you see it coming.

Tail Swing – Nacrasena slams his tail onto the ground behind him before swinging it in a wide arc towards his side. If you are behind him when this happens, try to move back as far as you can, the arc is wide but the range is not massive.

Water Blasts – Nacrasena will wave his stinger in the air before burying it in the sand. Small blue circles will begin to appear around him, indicating where the blasts of water will come from. These can be pretty tough to dodge and will knock you into the air if they hit. Try to stay mobile during this one.

Tail Zap (Charged) – This ability has a very fast animation and can be a tricky one to deal with. If you can catch the short animation, where he raises his claws and bring his front legs up, you know he’s about to fire a line of electric energy from his stinger. Keep moving around him in a circle to dodge this one, as he usually fires twice.

Tail Sting (Charged) – If you get electrocuted during the fight, Nacrasena will sting you. This does a lot of damage and can kill players with less HP. He will also hold the stung player above his head for a short time before slamming them into the ground and tossing them away. You can force Nacrasena to drop friends by hitting him with stagger abilities and whirlwind grenades.

Lightning Strikes (Charged) – Nacrasena hunkers down with his claws covering his face and his stinger raised in the air, a blue shield will appear around him. Large blue circles then begin to appear on the ground following a player. Lighting will then strike the indicated area damaging and electrocuting anyone hit. Avoid the player this attack is following, or keep moving if you are the one being attacked.

This concludes the Lost Ark Nacrasena Guardian Raid Guide. We hope you found it useful! If you did, why not check out our Lost Ark hub?