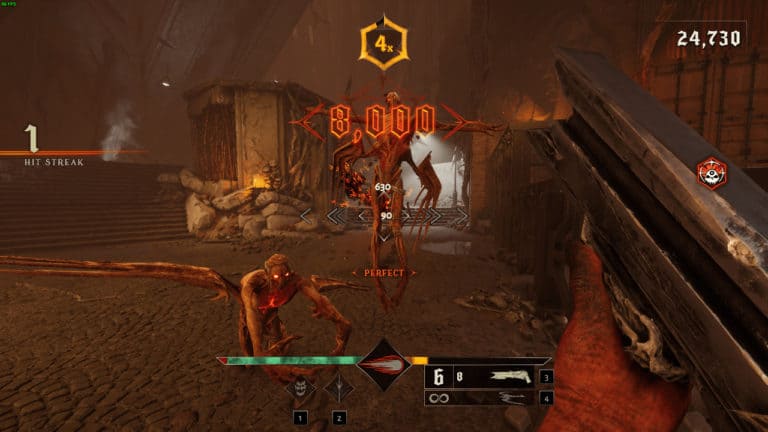 Hell is tough but luckily Metal: Hellsinger equips you with an arsenal of weapons more than fit for the task of felling the underworld’s finest demons.

With different ultimates, firing rates, and ranges, there’s something there for every play style. But as is often the case with shooters, not all Metal: Hellsinger’s weapons are created equal.

Some shine whatever the situation, while others fail to make enough of an impact to make them worthwhile. With six weapons at your disposal and only four slots in your loadout (two of which are already spoken for), there are decisions to make.

Transform The Unknown into the fastest gunslinger in hell with these precise and powerful dual revolvers that prove their worth in virtually all situations.

Reasonably fast reloading, a blisteringly fast fire rate, and enough damage to take out even projectile-slinging Cambions in a few shots, The Hounds rise to the occasion in any situation.

Better yet, the ultimate spawns a carbon copy of The Unknown that’ll lodge lead in any demons that stray too close. Decent range also means you can pick off Metal: Hellsinger’s more formidable enemies from a distance with this weapon.

Focusing on precision means the crosshair is less forgiving than the Persephone, but as downsides go, it’s one you can easily overcome by tuning your aim.

Possibly a controversial pick, given Metal: Hellsinger’s more exotic weapons, Persephone is the classic shotgun imbued with the power of the Underworld’s leading lady.

Like any shotgun worth its salt, Persephone fires a cluster of bullets with a substantially larger spread than single bullet weapons like The Hounds. Timed to the music, Persephone’s shots can dispatch multiple enemies in one go, useful for when things get hectic and you need some breathing space.

Persephone has one of the game’s largest ammo capacities and an ultimate that wipes out even elites with one massive arena-engulfing shot. Reloading is slow, and range is on the shorter side, but equipped alongside something that can pick off distant enemies like The Hounds, you’re covered for any eventuality.

As an added bonus, nothing’s quite as satisfying as hearing Persephone reloading in time with a chugging riff.

An angelic heavy crossbow said to have been pillaged from the heavens, the Vulcan fires off bolts that explode on impact, causing substantial damage to any demon unfortunate enough to cross its path.

As far as tools for wiping out a horde of careening enemies before they get up close and personal, the Vulcan reigns supreme. It also has a monstrous range and is reasonably forgiving when it comes to accurately lining up your crosshair.

Add to that the ability to use it as a makeshift launch pad when shot below you, and it’s a versatile addition to any loadout. That is, if you can work with reloading every two shots and use a non-damage dealing ultimate that bunches up enemies and is only situationally beneficial.

Paz – The Pulse of the Universe

Our talkative skull friend is more or less useless as a weapon, but don’t let this put you off using Paz. After all, Paz is one of the fixed load-out weapons, so we might as well put him to good use.

His utility comes as a tool for priming enemies for slaughter. Firing off a handful of shots staggers enemies, allowing you to dash in for a quick health-boosting slaughter.

While out of combat, firing off Paz in time with the music keeps your fury multiplier going, helpful in carrying a x16 to the next fight without fear of losing its damage-boosting benefit. Paz’s Thunder and Hell ultimate can turn the tide when enemy numbers start to feel too large to handle. It will crystallize all demons in range. Killing one kills all.

The Hellcrow is a duo of metallic crows that you’ll pick up early in the game. At first, no reloading and decent damage output seem appealing, but the Hellcrow is quickly outclassed by better Metal: Hellsinger weapons like The Hounds and Vulcan.

A short range and the need to be extremely precise when firing off a shot make it more trouble than it’s worth in most cases. A strong Ultimate that absolutely tears through enemies when timed right improves the Hellcrow’s profile, but that alone isn’t enough to merit a permanent slot in your loadout.

Lastly, we have Terminus, The Unknown’s starting weapon. It isn’t bad, but the issue here is that this is a melee weapon among a sea of better guns and other projectile-slinging options.

While the Terminus is fun to use and capable of dishing out the damage, not least the punch-packing Inferno Solo ultimate, using Terminus generally puts you in harm’s way far more often than necessary, especially when the other weapons at your disposal don’t.