Home » Gaming » Minecraft » How Big is a Chunk in Minecraft

How Big is a Chunk in Minecraft

Understanding the size of a chunk will help Minecraft players keep track of their location. 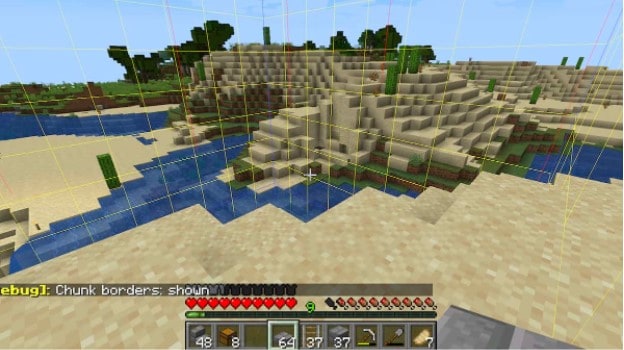 Most Minecraft players only think of the Minecraft world as being split into Biomes, and further down into blocks. However, chunks are a unit segment of the world from a Minecraft development perspective. Once players understand the boundaries of a chunk space, they can better conceptualize area and loading times, for a more efficient gameplay experience.

In Minecraft, a Chunk is a 16×16 segment of the world, inclusive of the depth till the Bedrock. A chunk has a height of 256 blocks and can contain a maximum of 65,536 blocks in volume.

Since Minecraft is a sandbox world, new chunks are created as you traverse space and explore new areas. If you’re wondering how many chunks exist in the Minecraft world – there is a possible 14 trillion chunks that can be generated in Minecraft.

Minecraft doesn’t load all the chunks when you’re playing the game, and 10 chunks are generated as a default around the player. However, this can be configured to be as low as 3 or as high as 15, depending on the player’s internet connectivity and render settings.

Players just starting out in Minecraft may not need to pay attention to Chunks, but it comes in handy for seasoned players who’ve been building a large map over years. Being in close proximity to the right chunks can determine how your plants grow or even the likelihood of running into certain mobs. Your plants and crops cannot grow in an unloaded chunk, so you can’t travel too far away from them or they are essentially suspended in time.

Note that Spawn Chunks are different from regular Chunks in Minecraft. Spawn Chunks refers to the area where the player is first spawned into the game, and are a standard chunk. These don’t unload, they remain loaded no matter where you expand, and you can use these chunks to build farms or mob grinders.
In order for players to view Chunk Borders, they simply have to press down F3 + G and they can see block outlines. Chunk Borders are in yellow.