Home » Gaming » Minecraft » How to make Potions in Minecraft

How to make Potions in Minecraft

Here’s how to create powerful potions in Minecraft. 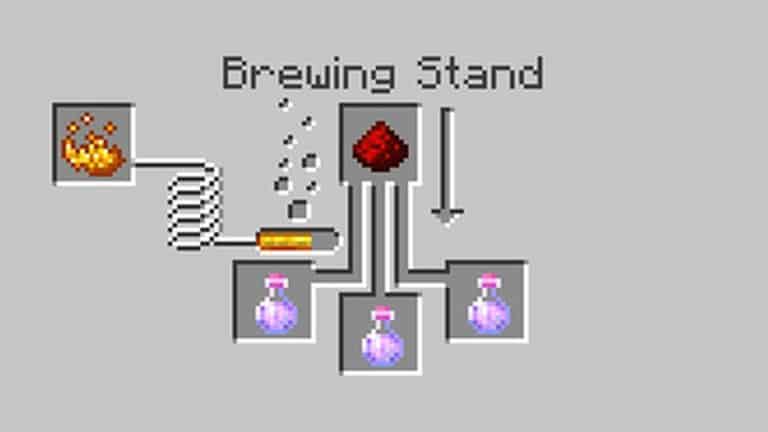 Potions were introduced along with the Nether region in Minecraft. Unlike crafting or enchanting objects that require specific recipes, all potions use the same base ingredients that you can build upon for various effects. Here’s how to make potions in Minecraft.

How to Create Potions in Minecraft

Here are the materials you will need to start brewing potions in Minecraft.

In order to make Potions in Minecraft, you’ll have to open up the Brewing Stand and add the ingredients. There’s a slot for a Base Ingredient, Secondary Ingredient, and Elemental Ingredient.

How to Make Potion of Invisibility

The Potion of Invisibility is one of the easiest potions to make in Minecraft and is definitely a sought-after potion since it grants the player three minutes of complete invisibility. Here’s how to make it:

Most potions are made to be consumed by the player themself. You can consume a potion by adding it to your Hotbar and then drinking it. Splash potions allow you to attack a mob or player by throwing the potion on them to deal damage.

How to Make the Awkward Potion

The Awkward Potion is possibly the most important potion in Minecraft since it forms the base ingredient for other potions. Here’s how to make it:

The Awkward Potion is used in the following potions. Usually, these potions simply require three bottles of Awkward Potion along with one or two ingredients like Magma Cream, Rabbit’s Foot, Dragon’s Breath, or Phantom Membrane.

Although you need to continuously create Awkward Potion in order to make new potions in Minecraft, the only valuable ingredient it uses is Nether Wart. It’s a good idea to collect as much as Nether Wart as possible from a Nether Fortress or Nether Portal if you plan to play with a lot of potions in your game.

Blaze rods are another necessary ingredient for potions, and players will need to defeat blaze enemies in order to acquire significant portions of it.

How to Craft Potion of Strength

The Potion of Strength gives the player extra attack power. You can either buy this potion in creative mode or craft it in survival mode. While you can consume this potion for any combat in the game, it’s particularly useful when battling the end-game Ender Dragon or the Wither. Here’s how to make it:

Strength potions last for three minutes when consumed, giving player attacks an extra heart and a half of damage. Ensure you’re using melee weapons with the strength potion since it will not affect bow damage.

Positive potions are almost all drinkable except for the Splash potion of healing. These potions add an effect to the player who consumes them, or to the armor worn.

Mixed potions include all three levels of the Turtlemaster potions, made with Turtle shell, Glowstone dust, and Redstone dust.