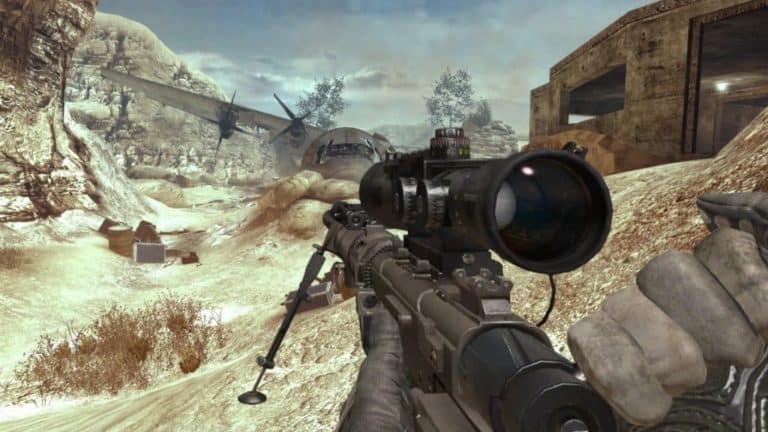 Table of Contents hide
So, is the Intervention actually coming back?

If there’s one thing we want to see Modern Warfare 2 – it’s got to be the return of the Intervention sniper rifle.

Arguably one of the most well-loved guns in the original game, the Intervention provided unstoppable power and accuracy, leaving its rivals like the Barrett 50. cal in its wake. It just felt right.

Combined with the Stopping Power perk, one shot to the head or stomach would be enough bring down a foe. Without it, you’ve for to aim for head for a one hit kill.

NOW READ: Here’s everything you need to know about Modern Warfare 2 pre orders

But it wasn’t just about its firepower, everything about the gun – including the satisfying bolt action motion and firing sound made this a perfect weapon for multiplayer.

In fact, some of the my favourite memories of the game were in the multiplayer – magically landing a kill streak while bobbing and weaving, zooming in quickly, firing, reloading and then doing the same again.

Amazingly, when put next to its rival the Barrett .50cal – the Intervention comes out weaker. It has a smaller magazine capacity and rate of fire – not to mention more idle sway. But for some reason, it always just felt better.

As one gamer wrote on Reddit: “When you fire the Intervention half way through the ADS animation it has the same accuracy as hip firing. I quick scope with the Intervention and it’s most effective the split second after you are zoomed in all the way.

“If you don’t have time to zoom in all the way then you might as well try for a no scope. Quickscoping with the Barrett is possible though, there are probably Barrett quickscoping videos on youtube.

“also: I use the Intervention because it looks cooler and the noise it makes as the bullet slices the air is badass. pthewww“.

Another gamer added: “Honestly, I just like the Intervention’s smaller profile. The Barrett is too damn big and noisy. Plus, the recoil is atrocious. Since I use the ACOG on my Intervention, the lower recoil helps quite a bit.”

The Intervention was often paired up with an ACOG Scope, making it an assault-type sniper rifle, which made it more accessible to those who preffered mid range combat.

Arguably the best thing about the Intervention was the difficulty curve. It was a hard gun to master (I never did), but those who put in the effort were rewarded with an almost unstoppable weapon. It took time, but anyone could become a master – and there was always a respect from the community around those who tamed the Intervention.

So, is the Intervention actually coming back?

There has been no news yet, but there are certainly rumours it could well be coming back in Modern Warfare 2 – although that’s all these are… rumours. Those same rumours also hinted the popular ACR assault rifle would make a return.

The Intervention did make a return in the Modern Warfare Remastered – but it was called the S-Tac Aggressor, and was added in an update on June 27th, 2017.