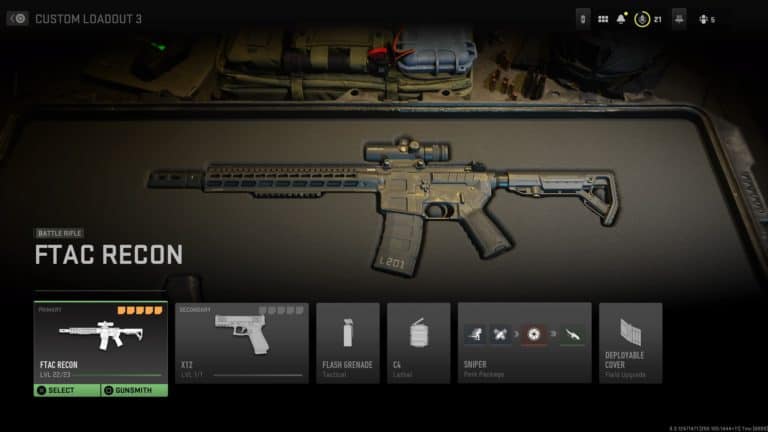 Our Modern Warfare 2 Best FTAC Recon build guide will help you master an excellent Marksman Rifle. For the first time, this weapon class is viable in multiplayer, arguably a first for the series.

If you’ve not dug into these weapons before, they might be a bit challenging for you.

Let’s take a look at our build guide.

Marksman rifles are an actually viable choice now, something we didn’t feel was an option in CODs past.

So if you like to hang back during battle and plink enemies from afar, then consider this build for the FTAC recon marksman rifle.

Throw it all together, and you’ll get something that looks like the image above.

This is not an up close and personal type weapon. With its small magazine size, you won’t be charging around the battlefield doing 360 no-scopes. The rifle does offer both semiautomatic and full automatic fire options, but if you plan on going spray-n-pray, be sure to pack the 15-round magazine.

We recommend you stick to the back, to the corners, and any rooftops or high ground and let it rain lead on anyone foolish enough to wander into your crosshairs.

The sight picture on the Forge-Tac scope is crystal clear and provides a 4x zoom, perfect for all of the maps in the beta.

Pack the deployable cover as your field upgrade and find a corner in an open area. You can sit there, mount to the cover, and take potshots for easy kills.

And even if someone does come back to your spot for revenge, you can weigh your one death against the 5-6 enemies you put down for dirt naps.

What other FTAC Recon Attachments are Good?

The customization options are just plain nuts in the new COD, so go ahead and mix and match what feels right to you.

For instance, if you want to squeeze a little more range and stability out of this rifle, swap in the 419MM EXF Barrel and dial long distance on your enemies.

Besides that, you can try longer-range scopes if you really want to keep your distance or slap a 15-round mag on and a short barrel and try to run and gun. Use your imagination.

If you’re interested in any other weapons, you can check out some of our other build guide pages.

Why You Should Use the FTAC Recon

When you first look at the FTAC Recon you might ask why you’d even use it. After all, it’s just an M4 with worse capacity. Right?. Wrong!

The FTAC Recon, in the right hands, is easily one of the best rifles in the game, and that’s all thanks to a few key benefits it has over other weapons.

Firstly, it’s the only .485 Socom weapon in the game, meaning it has almost unparalleled stopping power and means you won’t have to work through a bunch of other weapons to unlock stuff for it. On that note, it’s also based on the M4 platform, meaning you should immediately have a bunch of attachments you can use.

There’s also an x7 Thermal Rifle Scope for this gun, which isn’t super unique but does make it even more incredible than before.

Is the FTAC Recon the Best Marksman Rifle in Modern Warfare 2?

For our money, yes, the FTAC is our favorite marksman rifle.

Is the FTAC Recon a real gun?

Yes, it’s based off of the M4 assault rifle.