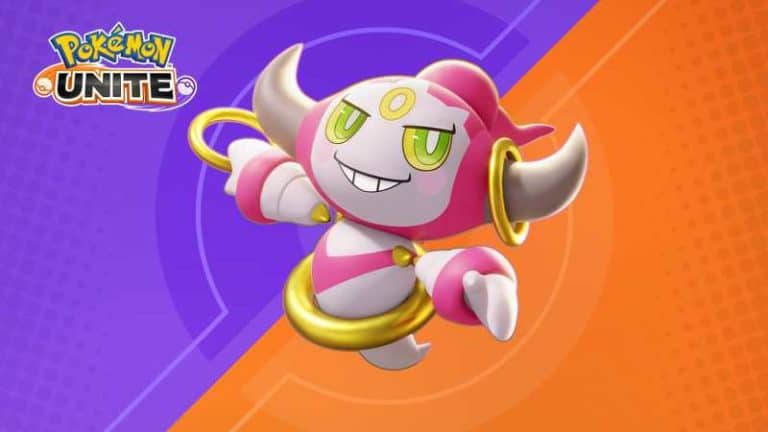 The adorably cheeky mischief Pokémon Hoopa has been revealed as the latest Pokémon to join Pokémon Unite. This addition comes alongside the Pokémon Day festivities taking place from February 24th, 2022. Here, we’re going to take a look at Hoopa’s Pokémon Unite moves and abilities, so you know just how to play this incredible new Ranged Supporter.

According to the official announcement on the Pokémon Unite website, Hoopa is an incredibly useful ranged support Pokémon, ready to wreak havoc on opposing teams. Similar to Hoopa’s ability in the anime, the pink Pokémon will be able to open up portals in the Pokémon Unite battleground to steal items from opponents. Players will also be able to transform the mischievous Hoopa Confined into the terrifyingly powerful Hoopa Unbound during matches, to unleash the Pokémon’s full power.

At Level 1 and Level 3, Hoopa will learn Astonish and Confusion. The ghost-move Astonish deals damage to opponents and leaves them unable to react for a short period of time. So not only is Hoopa great in support (see below), but the mythical Pokémon is also ready to be used in offense, as well.

Confusion also deals damage to the opposing team’s Pokémon. While Astonish will deal damage to any Pokémon in a designated area, Confusion will only deal damage to the first Pokémon it hits. However, once Confusion has hit, the telekinetic power it unleashes will cling to said Pokémon, and will then release a powerful explosion. This also damages any opposing Pokémon in range and temporarily decreases their movement speed.

At Level 4, Confusion can be upgraded to either Hyperspace Hole or Trick. These moves both largely benefit ally Pokémon, making Hoopa the perfect support Pokémon for your team.

In contrast, Hyperspace Hole can instead create a ring in one of your team’s forward goal zones, allowing ally Pokémon to warp between goal zones, while also increasing their movement speed. Note that there is a brief cooldown between times an ally Pokémon is able to warp.

Trick will create a link between Hoopa and an ally Pokémon and will increase both Pokémon’s movement speed and provide a shield to them both for a short time. This clever move will then also cause the linked Pokémon to attack simultaneously if Hoopa uses Shadow Ball or a basic attack. Finally, Trick can be upgraded so that the ally Pokémon’s HP will be increased every time it deals damage to an opponent using the linked move.

At Level 6, Astonish can be upgraded to other ghost-moves Phantom Force or Shadow Ball. Both moves perfectly complement the above support moves, maintaining the ability to deal damage when needed.

Phantom Force is another move that makes the most of Hoopa’s passion for portal-hopping, as the Pokémon creates a ring near to an opposing Pokémon, warping it close to them before it both deals damage to and shoves the chosen opponent. Hoopa will then deal further damage to said opponent Pokémon by firing two flames that also reduce the enemy’s movement speed for a short time.

If Phantom Force is used near an ally Pokémon linked by Trick, the ally Pokémon will be able to warp to the same location and will recover some HP. Phantom Force can also be upgraded to make Hoopa invincible for a time after using the move.

Shadow Ball allows Hoopa to deal damage to an opponent by hitting it with a shadowy projectile. While dealing damage to the enemy, Shadow Ball will also decrease the opposing Pokémon movement speed and Special Defence for a short time. If the same Pokémon is then hit by Hoopa again, it will receive additional damage and will temporarily be unable to act. Shadow Ball is also affected by Trick, as a nearby ally Pokémon linked to Hoopa by Trick will also attack with its own Shadow Ball. Finally, Shadow Ball can be upgraded to deal additional damage with an explosion.

Hoopa’s Ability Magician also utilizes Hoopa’s portal-creating powers to make a hole beneath an opponent’s berry, and warp it to Hoopa. If no berry is available, Aeos energy can be teleported instead. If the opposing team has no berries or Aeos energy to teleport, then the cooldown before Magician can be used again is reduced, making this yet another incredible support ability.

Finally, Hoopa is not restricted to its Confined form in Pokémon Unite. Players are able to transform Hoopa Confined into its even more Powerful Unbound form, and Hoopa’s moves are automatically changed to Hyperspace Fury and Psybeam while Unbound.

Hyperspace Fury unleashes a powerful barrage of attacks upon the opposing team, damaging any and all enemy Pokémon in the area and leaving them unable to move for a short time.

Psybeam, meanwhile, sees Hoopa unbound release a powerful ray in front of itself, dealing damage to any enemy Pokémon caught in its path. During Psybeam, Hoopa becomes immune to hindrances, but cannot score goals or use Magician while Unbound.