The Pokemon Brilliant Diamond bundle allows you to get both games at once, but is it really worth it? 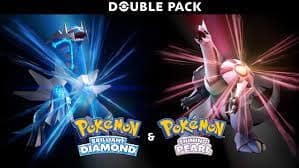 For as long as Pokemon games have been out, we’ve seen the release of two nearly identical games. Usually the only defining feature is their exclusive Pokemon and of course the box-art legendary. It seems for as long as these games have been a thing, it’s just been a ploy to get extra cash out of die-hard fans. As we all know that most Pokemon fans will absorb and inhale all possible Pokemon content.

This does make sense on the surface. The games are pretty much identical, so why not save time and compile all the data onto one disk and have a switch determine which version you play. If you were planning on getting just the one game, then this isn’t much of an issue. However, if you were intending to buy both then it’s worth knowing that you are technically buying the exact same game twice. Both at full price.

If you want to, then by all means, but at the very least you should know what Nintendo are trying to sell to you. They basically want you to buy the same game twice.

Although, some hacked switches might be able to flip this switch themselves and basically play both games from one copy.

This isn’t intended as a slight against Nintendo, after all this formula has worked since their first game. So why not continue, after all it’s expected now. But at the very least, we should note that the Pokemon Brilliant Diamond bundle, where you can get both copies of the game at certain retailers is technically a waste of your money. Unless you’re buying one copy for yourself, and one for another, of course!