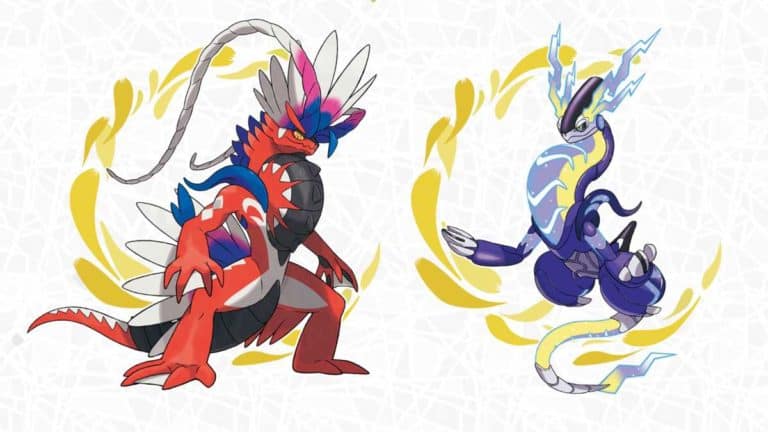 Whatever your current opinion on the mainline Pokémon games, there’s no denying the excitement surrounding another new generation of Pokémon. Pokémon Scarlet and Violet are coming just in time for the 2022 holidays, and a new trailer released on June 1 revealed the new Legendary Pokémon. If you hadn’t already, you can start making an informed decision which version you’ll be grabbing.

The Pokémon Company has confirmed that the new Legendary Pokémon for Pokémon Scarlet and Violet will be named Miraidon and Koraidon, respectively. While details about the two Pokémon are still “shrouded in mystery”, we know they are set to be among the strongest Pokémon ever.

For the time being, we have no official confirmation about the shared type the new Legendaries will be, though based on their sprites, we’re in agreement here at WePC that they are most likely to be Dragons.

What their own unique secondary type will be also remains a mystery so far, but we can again speculate from their appearance. Koraidon is a little harder to decipher than Miraidon, but we could perhaps hazard a guess at it being a Fire-type. Alternatively, given its ornate style with the large spines on its back and long, battle-rope antenna, we’re more inclined towards Koraidon being a Fighting-type Legendary.

Again, we can only speculate on the typing of Miraidon at this point, but looking at the design of the new Pokémon, it’s possibly easier to decipher than that of Koraidon. Based on the jets keeping it in the air and the lightning bolt-esque horns upon its head, it seems to us that Miraidon could be an Electric-type, a common type choice for previous Legendaries. However, there is also reason to believe that it could be a Steel-type Pokémon, based on it’s Genesect-like body.

A Dragon/Fire and Dragon/Electric set would be a repeat typing of Reshiram and Zekrom, so it could be that we’re more likely looking at a Dragon/Fighting and Dragon/Steel pair. Of course, we’ll update this as soon as more information is made available about the two new Legendary Pokémon, their strengths and their typings. In the meantime, check out which other new Pokémon have been announced for the game.

Which Legendary Pokémon you’ll encounter has always been one of the leading reasons behind choosing which Pokémon game to play. Now we know the designs – and potentially the types – of the new Pokémon, you can start to think about which game you’ll choose… if you haven’t already. Of course, there will most likely be other version-specific Pokémon to consider, too, so you might still want to keep an open mind.

Of course, we’ll update this as soon as more information is made available about the two new Legendary Pokémon, their strengths and their typings. In the meantime, check out all the other Pokémon that have been announced for the game.