The right tool for the job 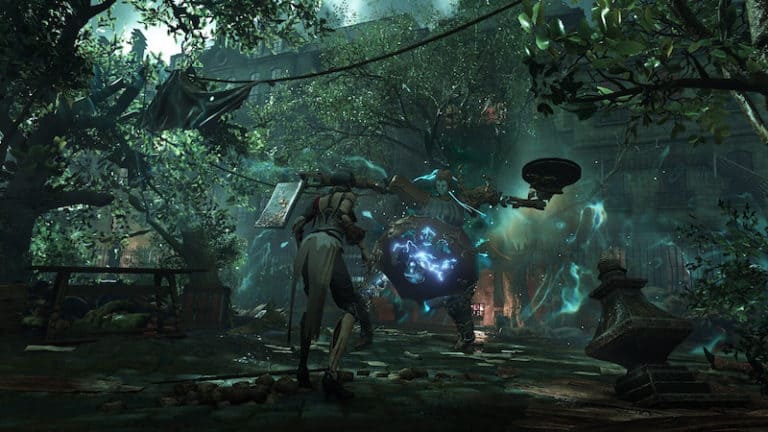 After some testing, we’ve crowned the best weapons in Steelrising.

There is something for everyone to choose from, no matter if you are a fan of fans or not.

Steelrising offers a lot of diversity when it comes to choosing your class. You can be a heavy-hitting tank or a fast-paced dance machine. What is great about the game is that you can use one of the very first weapons for a long time if you keep upgrading it.

Here are what we consider some of the best weapons for the early stages as well as the later parts of your adventures in Steelrising.

This is an honorable mention due to the fact that it is a DLC to the game. You can purchase the Discus Chain for £2.49.

This weapon is a quite good addition to your arsenal and perfect for an Engineer build due to its scaling and versatility. It has a very fast spinning attack that helps you with swarms of enemies surrounding you. It scales with Power and Agility and has a decent Impact statistic.

However, the Discus Chain cannot be unlocked in the game in any other way, and that is why it’s getting only an honorable mention.

Nemesis Claws is one of the first weapons that you can purchase from the Boutique. It’s a great weapon for fast combat and has a B scaling with Agility Affinity. Keep upgrading it and you have one of the best Agility Weapons in the game.

Due to its special move Counterattack, it allows for a very mobile playstyle. You can jump around and dodge attacks while throwing in a couple of reversals to deal a lot of Physical Damage.

A very good weapon for both early and late game. It pairs well with any Power builds like Soldier or Bodyguard. This weapon is very slow but deals a lot of damage per single hit.

It’s a very heavy damage weapon with a lot of Impact stat. It also scales with Power, Alchemy and Agility, but mostly with Power.

To obtain it, go to the Pier next to the Factorio district. Then do a little bit of parkour and jump on the bridge. Head left and down the stairs. The Wheel of Vengeance is in the chest at the bottom of the tower.

Its special ability is Counterattack, with astunning 600 Impact stat.

The Falchion and Sabre is also one of first purchasable weapons at the Boutique. This is a medium-weighted dual weapon. If upgraded it packs a punch.

It has a decent Power scaling with a very good Agility scaling. It deals a lot of Physical Damage with high Impact and Immobilization chances.

You can also use the special move of this weapon which is the Blade Tornado. Not only does it look cool, but Aegis can perform a beautiful spinning attack. A great weapon to pair with our number one.

A little twist on the normal fans for all your Alchemists out there. Frost is one of the most powerful elemental effects in Steelrising.

Frosted Fans scales off Power, Agility, and Alchemy. It doesn’t have the highest damage, but you can freeze your enemies with its special ability. The three attribute scaling makes it very effective in the late game.

The special move of this weapon is Invocation of Ice. It infuses the fans with frost and allows you to deal a lot of Alchemical Damage to enemies.

Fire Chain is a great alternative to the Discus Chain from the DLC, with great Power scaling. This weapon also scales with Agility and Alchemy.

It’s a medium-type weapon with its special ability being Invocation of Fire. That means that you can infuse your weapon with Fire and Ignite your enemies by applying the Burn effect.

Fire Chain is overall a very good weapon, especially upgraded for any class, but works best for Soldier.

READ MORE: Steelrising – Where to Find the Replacement Lever

Our favorite weapon is located in the first location of the game. Before you reach Paris, you make your way through the gardens. This weapon can be found in a chest in front of the bridge.

It’s a ranged weapon that applies the frost effect from a distance. With only three or four shots, the enemy is frozen, which makes it open to your attacks.

It’s an amazing weapon to have, especially when paired with something in your second slot that lets you use that opening from the frozen effect. Its special ability allows you to unleash a frost shield in front of you that also deals damage if it comes into contact with an enemy.