Home » Gaming » Steelrising- An Interesting Take On A Well-worn Formula

Steelrising- An Interesting Take On A Well-worn Formula 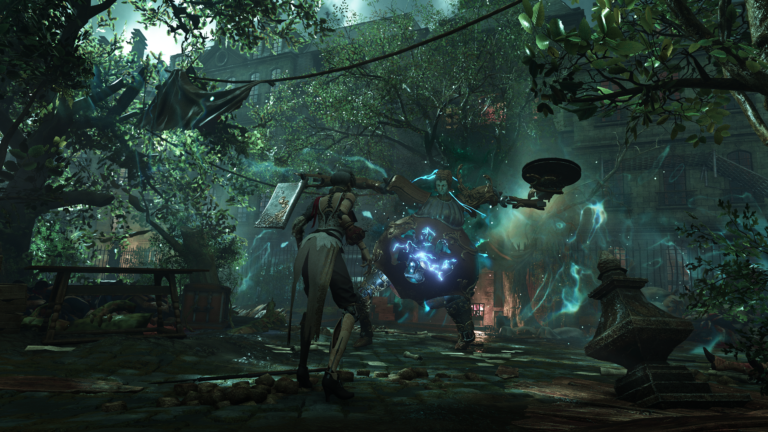 Soulslike games are a dime a dozen in this day and age. Hell, you can’t move without either bumping into one of the official FromSoftware games (Dark Souls, Bloodborne, Sekiro, Elden Ring) or one of the games that are trying to ape off the success of that series (Lords of the Fallen, Nioh, Mortal Shell, Remnant: From The Ashes). Steelrising wants to be more than that, though. It wants players to remember it long after those other games are forgotten about, and it wants to try something completely different in aesthetic when compared to other games of the ilk. But does it succeed at this? Can it take the tropes that so many have before this and mold them into something new, something much more satisfying than the rest?

The Premise & Combat Of Steelrising

Steelrising sees you playing as an automaton, Aegis, in Paris, just after the revolution. Except here, an army of robotic monsters quelled the Revolution, and they’re ready to slice and dice anything or anyone that gets in their path. Your masters send you out to take on the robots and make sure that the revolution succeeds, and in order to do this, you’re able to choose what exactly you want to be. There are multiple different playstyles in rotation here, multiple ways to play the game, and multiple ways to find yourself turned back into the parts you once came from.

Something that often kills games that want to emulate Souls games dead in the water is that they simply cannot replicate the strategic combat. A lot of these games look at the combat that FromSoftware implements in their games and take away the brutal nature of it, rather than how it’s basically a dance between you and your opponent to see who messes up first. Steelrising actually does understand what makes a Souls game tick, luckily, creating a combat system in which you’re required to block at exactly the right points, before striking away at your enemy’s life.

Weapons At Range in Steelrising

You have different weapons that you can equip, but these often boil down to a melee weapon and a ranged weapon (this ranged weapon is EXTREMELY good at keeping your enemies away, so make sure you’re using that as much as you possibly can). In addition to this, there are the obvious consumables that’ll either heal you up or damage your enemies further, creating something of a situation in which you have to time everything correctly in order to survive to your next move.

There are concerns here, though. If the combat doesn’t evolve with you as you progress through the game, then I can see it becoming rather tedious rather quickly, and the difficulty will need to ramp up in order to keep it so that you actually find what you’re doing to be at all satisfying. It’ll also be interesting to see how the weapons that you get increase in potency over time and how your customization options change. As it stands, the preview build features a menu for customization but few options for actual customization, which will likely be completely rectified in the final release of the game itself.

An important facet of these games is, of course, the bosses. It’s a pleasure then to say that, for the most part, they’re really fun encapsulations of the standard gameplay loop of the game. Attack, block, repeat, with a few variations here and there. There ARE teething issues, though, with one of the minibosses, in particular, being extremely easy to ‘cheese’ (a term used by players to describe a way to quickly defeat a boss without engaging in the boss’s actual mechanic). The final boss of this preview build was incredible, though.

Not only did it have multiple different phases that took me a while to learn, but it felt rewarding and, above all else, satisfying to beat in the end. That’s actually a common throughline with all of these bosses, even the one that is easy to ‘cheese.’ Not only that, but the music is GREAT, fast and frenetic during the times that it actually matters but quiet and pensive during moments where you’re not in combat and are exploring. The boss music could do with a little more diversity, but personally, I’ve chalked that down more to the fact that is an early preview build of the game than anything resembling or reflecting the quality of the final product. The final soundtrack of the game has the potential to be something incredibly special, so keep an eye out for that in the near future.

Our Final Thoughts on Steelrising

In terms of accessibility, Steelrising does something that many of this genre fail to do. It has a system that it dubs the ‘Assist System’ that allows you to change various different mechanics, such as changing the amount of damage that you take from opponents’ attacks, how long it takes your stamina to cooldown, and various other mechanics that’ll make your life a lot easier. Personally, I messed around with these in order to work out to what degree they actually worked and were successful, and I was rather surprised to discover that while making life a lot easier, they never felt like they were undermining the difficulty or the content of a boss.

Steelrising is a game that could be something incredibly special once it finally releases. It’s a take on a system and genre that has been well-trodden and extremely well worn by this stage, yet it feels new and fresh in the way it presents itself to an audience and plays. While it’s easy to exploit and beat some of the bosses, they have incredible design and some absolutely sublime musical themes that make it so that you’ll never really get tired fighting them, and you’ll want to keep coming back to this game over and over again until you’ve finally perfected a boss. It’s not going to replace Elden Ring in your heart, not by a long shot, but if you want to try something new, then it’s worth watching out for.