Something to (dark) tide you over 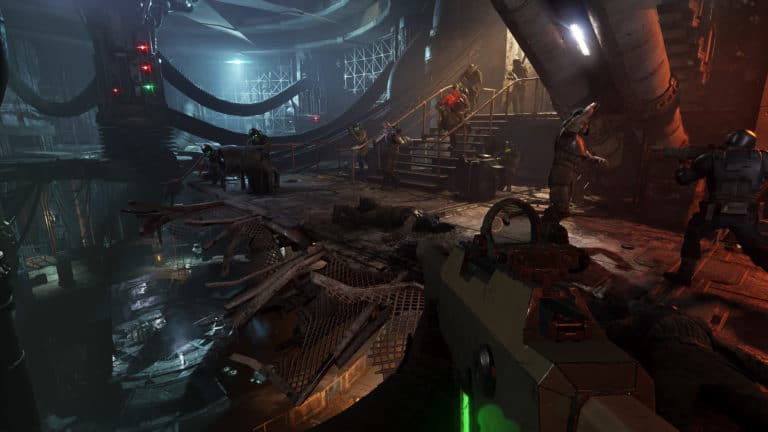 In keeping with its source material, the new trailer drips with gruff warrior champing at the bit for some action, dystopian visuals, and stacks of enemies begging to be blown to bits. Its brutal, action-packed, and full of attitude – everything we’d expect from the Warhammer universe. Fans of Warhammer: Vermintide 2 with a tooth for the 40,000 universe should find plenty to sink their teeth into here.

Check it out below.

The gameplay shows off some of the game set on missions. There are a few different chaos loving baddies, and some animations familiar from Vermentide 2, mission objectives and more. Moreso, we got some added extras for technical feats, such as NVIDIA DLSS, Ray Tracing, and Reflex. So, there are plenty of new technical features for those on both high and low-end gaming systems to experience and enjoy everything Darktide has to offer.

Here’s the official blurb courtesy of Fatshark to whet the appetite a little more:

”Take back the city of Tertium from hordes of bloodthirsty foes in this intense and brutal action shooter. Warhammer 40,000: Darktide is the new co-op focused experience from the award-winning team behind the Vermintide series.

In the depths of the hive, the seeds of corruption threaten to turn into an overwhelming tide of darkness. A mysterious and sinister new force is seeking to take control of the entire city. It is up to you and your allies in the Inquisition to root out the enemy before the city succumbs to Chaos.

As Tertium falls, Rejects Will Rise.”

Fatshark currently has Warhammer 40,000: Darktide scheduled for release on September 13th, 2022 for PC and Xbox Series X/S. Pre-orders are currently live on Steam and the Microsoft Store.

Expect more deep dives, previews, and extended gameplay over the summer as the September release window inches closer. In the mean time, feel free to watch the new trailer over and over again to tide you over.