Warzone 2 Can you Solo DMZ?

Surviving on your own is tough, but someone has to do it. 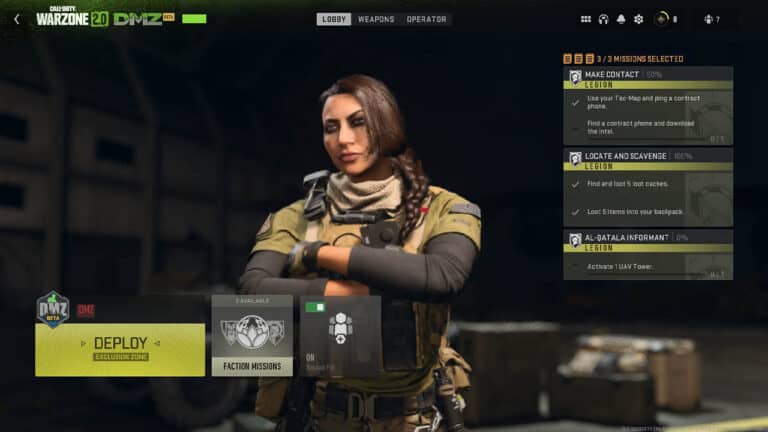 Warzone is finally here, and the new DMZ mode is a blast. That said, currently, it’s 3-man squads only, but can you solo Warzone DMZ if you try hard enough?

We’ve made it our mission to defy the odds and pull off a victory in DMZ without any other squad members actively participating.

Read on to discover how possible it is to go it alone in Warzone’s newest game mode.

Warzone 2 Can you Solo DMZ?

So, firstly, you’ll need to follow a few steps if you want even to try this Warzone 2 experience out. As we said, currently, you’re supposed to go in 3-man squads to take on this game mode, but there is a workaround.

Get yourself into a DMZ lobby, and make sure ‘Squad Fill’ is turned off. That way, when you start matchmaking, you should be dumped into a game on your own with no squad members.

Now comes the tricky part: staying alive. Obviously, this is a one-life game mode, so if you go down, that’s game over for you. Usually, your squad could revive you, but you’ve decided to forgo such niceties.

So get ready, and we’ll go into how you need to act to survive this mode on your own.

Warzone 2 How to survive alone in DMZ

Okay, so there are a few things you’ll need to do if you want to survive like this on your own. We’ve got a few tips that can make your life easier, which we’ve gone into in the list below.

Since you’re going solo in Warzone 2 DMZ, you need to draw as little attention as possible. Only fire your weapon when you need to, and even then, if you can get a weapon with a silencer, all the better.

Outside of weapons, stick to the map’s outskirts if you’re lucky enough to drop near them. Most AI enemies won’t follow this advice, so sticking to less-traveled roads gives you more chances to hang on.

Stay at a Distance

As a general rule in Warzone 2’s DMZ mode, you should be very cautious when approaching an objective. Whether it’s your Exfil or a Contract Phone, you need to make sure that the area is clear because, typically, they’re not.

Objectives are the places that AI enemies are liable to congregate around, and other human-controlled squads will also be more likely to be heading toward them as well.

Use a long-range weapon and take out enemies from a distance before you start heading toward your objective.

By this advice, we don’t mean keep sprinting everywhere (that’s a bad idea.) Instead, this simply means that once you’ve taken out a few enemies from a safe location, that location doesn’t stay safe for long.

Once enemies are aware of where you are, staying in place is suicide. It’s best, especially when attacking a fixed location, to keep moving along the perimeter to find new vantage points.

Don’t Wait too Close to Exfil

The final piece of advice for anyone soloing DMZ is to not wait for the Exfil to arrive anywhere near the exfil. Against AI opponents, bushes and similar cover do not offer enough protection either.

You’re likely to be downed if you’re out in the open waiting for exfil. Without any squad members, that is an immediate game over. You also can’t exfil while downed, so your final priority is staying alive.

Hide in a nearby building for cover, and try to take out as many enemies as you can to make your final sprint to the chopper.

Warzone 2 Can you Solo DMZ FAQs

What squad sizes are available in Warzone 2 DMZ?

Right now, the only officially supported squad size is trios, but more might come down the line.

DMZ is a new persistent-world game mode in Warzone 2, tasking you with completing several objectives in actively hostile territory before safely exfiltrating.