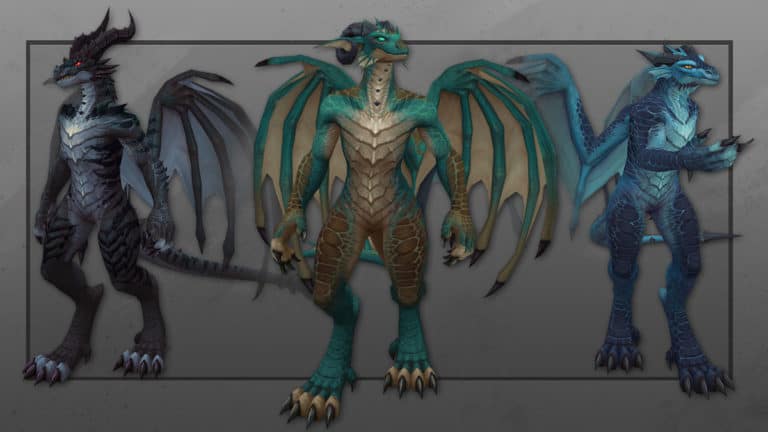 Blizzard Entertainment has unveiled a new WoW Dragon race, which players can actually play in the upcoming Dragonflight expansion. WoW’s new Dracthyr race is a new neutral race, which contains a brand new class called the  Evoker too. During the WoW Expansion reveal, we got a brief look at the new race, so let’s dig into what they contain.

World of Warcraft Dracthyr race – what we know so far

The new WoW Dacthyr is a new neutral race, which means they work similarly to the Pandaren. When you make a Dracthyr, you will then have the option to roll them as the Horde or Alliance, but that option is present on the faction pane as you create a character on a server.

Upon character creation, you will then enter a new zone called the Forbidden Reach. This is a zone of the Dragon Isles that is exclusive to the new Dracthyr race. This is a zone that Neltharion commanded before the madness of the old gods corrupted him and his black Dragonflight kin. With the Dragon Isles resurfacing from their ancient slumber, so too are the Dracthyr race. Explore the concept and origination of the new race and its storyline, before venturing off to fight for the Horde or Alliance.

As for specific details on the race, we know there is both a  dragon and human form. The new WoW Dragon race works similarly to the Worgen, allowing you to customize your human and dragon forms alike. Expect to change your dragon’s aspect and adjust the head, scales, horns, wings, tails, and more. As for the human form, it appears you can adjust the horns of the human;’s head, including the scales and the usual human appearances, similarly to how human and Wogen customizations work.

However, we do not yet know two their racial passive and skills work. All we know is the WoW Dracthyr race is the first of its kind, as in it is an exclusive race and class combo, pairing with the new Evoker class. So, there are still announcements to come on the race, which we will only get an idea of when the upcoming yet undated beta tests for Dragonflight go live.