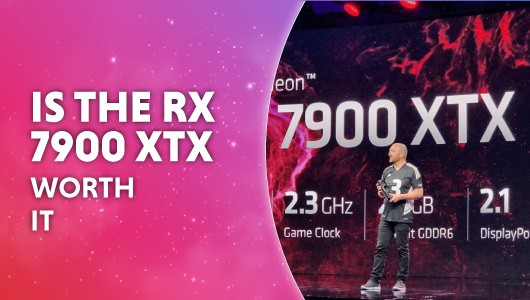 We’re bringing you all the details we can on the top-tier upcoming RDNA 3 GPU now that the AMD Radeon RX 7900 XTX launch is getting close. But with all this fuss, is the RX 7900 XTX worth it?

The first graphics cards that can fully use the new bandwidth standard, PCIe 5.0 x16, will be made available. As it is designed by utilizing AMD’s cutting-edge 5nm technology, just like the Ryzen 7000 CPUs, the Radeon RX 7900 XTX is an interesting product.

Here are the specifications of the RX 7900 XTX

The main focus seems to be on using the new FSR 3 and AI supersampling to reach the highest frame rates at higher resolutions than are currently possible with the current generation.

If you’re paying more than necessary for an RX 7900 XT, you’ll be blaming yourself for not finding an RX 7900 XTX at MSRP at launch. The $100 difference between the two will be quickly made up with expensive cooling and somewhat quicker clocks.

Similarly to this, AMD touts the XTX as the best product under $1,000, even if it would sell just as well at a larger four-digit asking price. This places it in the Nvidia RTX 4080 price bracket. It will be better to compare it to it. The cards are scheduled to arrive in mid-December, so the moment is rapidly approaching.

The RX 7900 XT, which costs about $100 less than the RX 7900 XTX, performs around 17% lower than the top-tier card. The 7900 XTX appears to be the superior investment as if it is still significantly better than AMD’s top GPU from the previous generation.

The performance of ray tracing is a tad underwhelming. At the time of the RX 7900 XTX introduction, AMD bragged about its advancements in ray tracing. Ray tracing was a challenge for the previous generation compared to Nvidia’s rivalry in this area. Despite an improvement, AMD’s stats indicate that the company won’t be able to compete with Team Green.

The RX 7900XTX promises to be one heck of a GPU for the price you’re paying for it. Nvidia’s 4080 is practically already dead in the water at the price they’re expecting for it. The 7900 XTX is superior to the 3080 and we expect it to do very well in benchmarks upon release.