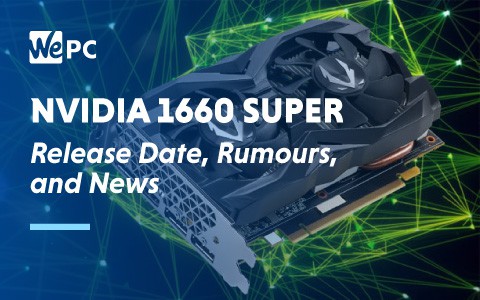 We already know that there are going to be three different versions of the Nvidia GeForce GTX 1660 SUPER card – the DUAL EVO, Phoenix, and TUF3 models, but what we now have is a firmer handle on the specifications of this card.

We now know that one of the main differences between the base and the SUPER model is the memory interface, with the SUPER card offering GDDR6 memory running at 14Gps compared to the GDDR5 running at 6Gbps that of the base card. This spec puts it above the GeForce GTX 1660 Ti which only features 12Gbps dies.

With the major change being the memory offered, let’s take a quick look at the custom models that will release.

The cards on offer appear to have two distinct variants, a dual-fan configuration, and a premium ‘Ice Storm’ variation. The main difference between these two variants is a slightly improved heat sink as well as the backplate.

The card will also have four display outputs (3x display port and 1x HDMI) as well as a full aluminum heatsink with three 6mm heat pipes. Finally, the card will connect to your motherboard with a single 8-pin connector.

The custom models by EVGA include the SC Ultra Black and the SC Ultra. Both cards will be of a dual-slot, dual-fan design in a compact form. Like the ZOTAC models, these cards will have a large aluminum heat sink and backplate.

Also included will be three display outputs which will be made up of display ports and HDMI. However, the exact specifications are not yet listed.

The GTX 1660 SUPER Maxsun model is being dubbed the ‘Terminator’. Maxsun has gone for a sleek look on their model which includes RGB lighting. Also included is a large aluminum heatsink with copper piping and a similar array of display outputs as the EVGA models.

As listed on their website, the Terminator model will include:

The PNY GeForce GTX 1660 SUPER Mini is the smallest of the models so far but that is to be expected of a ‘mini’ variant. The most interesting part about this model is that it has been listed with a release date of 17th October and priced at roughly $250. There will also be a non-mini variant on offer which would be a dual-fan design while retaining the same specs as the Mini.

With the GTX 1660 SUPER said to have around 5-10% better performance compared to the GTX 1660 it looks like it will fall just under the GTX 1660 Ti in Nvidia’s lineup. If the listing for the PNY card is correct, we could be seeing these cards tomorrow priced around the $250 mark.