25 million pirates take to the Sea of Thieves

Microsoft has certainly managed to capture gamers’ imaginations me hearties. 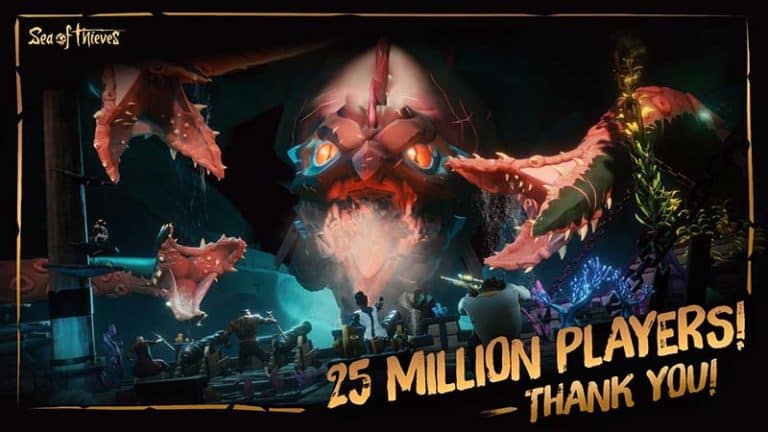 Arrrrgh is not the usual way to start off a news story but go with me on this one. Sea of Thieves developer Rare has announced that its open-world pirate romp has reached the 25 million player milestone, just six months after it hit 20 million which is an incredible achievement.

To celebrate hitting this number anybody who logs into the game before October 26th will get awarded some in-game currency. Virtual Pieces of Eight for you Jim lad.

Rare also confirmed that June was the most successful month on the ocean waves in the game with some 4.8 million active players, due in no small part to Sea of Thieves A Pirate Life crossover with Pirates of the Caribbean.

Playing the game before the October deadline will see you net 25,000 gold and 25 doubloons but to make it a bit more interesting, Rare will award a cracking 25 million gold to one randomly chosen player who turns in some treasure before the 26th.

If you have been away from the game for a little while for whatever reason, it will probably have changed beyond all recognition since your last voyage, and also the boost of the free currency might just smooth the sailing of your return.

Way back when it launched Sea of Thieves immediately picked up a lot of fines but after a couple of years of refinements, it truly is one of the games you should make an effort to sit down and play. If you have online friends to crew up with, then life is much easier but a great deal of fun can still be had if you want to potter around the high seas yourself and hopefully manage to avoid ending up in Davy Jones’ locker.

I need to stop making pirate references now so go and load up Sea of Thieves immediately.