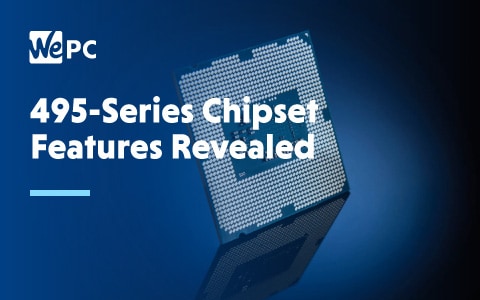 Earlier this week, an official datasheet was published for the 495-series chipset. This document is of particular interest as it reveals information about the specifications for when Intel’s new CPU launches.

This 495-series chipset looks like it will be compatible with Intel’s SKUs, which allow for efficiency to be gained through low power draw. 16 PCIe 3.0 Lanes will also be supported alongside up to 10 USB 2.0 connections, six USB 3.2 ports, and up to three SATA ports. Also included is a built-in Wi-Fi MAC which requires a CNVi module. Last but not least in this chipset is an OPI interface which allows up to a 4 GT/s data transfer rate.

What else does this mean?

Even though we now have access to the datasheet, this doesn’t answer all the questions we may have. The specific CPU names were not mentioned in the datasheet, it just details its support for the U & Y series of processors. With Intel developing the new Ice Lake and Comet lake processors, there is some speculation that this datasheet could be linked to those.

With the upcoming Ice Lake CPU expected to include greater integrated graphics support for entry-level gaming, it will also expand the market by boosting the efficiency and battery life for laptops that use it.

As with other leaks, this is all we know for now. It looks likely that Intel will be releasing some kind of product before the end of the year and will be interesting to see if this 495-series chipset datasheet links to that.

With AMD currently outselling Intel, Intel will have their work cut out for them when releasing their next generation of CPUs. Can they catch up to AMD? Will their aim for budget systems prove to be a good approach? Only time will tell on this.