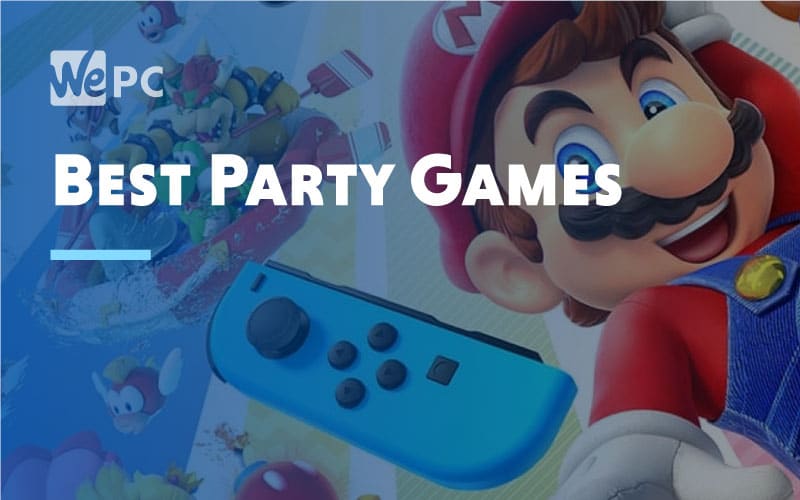 Looking for something fun to do at your next house party? Load up one of these party games below for a fun way to pass some time with friends.

Party games have a long history, dating all the way back from classic board games. Party video games come in all sorts of different types, from racing to fighting, strategy, and puzzles. We’ve tried to list a few different types here to give you some variety.

Any of these party games below will be great fun to try out with a group of friends and many of them can be played online too. These are our top five picks for party games to try out at your next gathering.

Mario probably needs no introduction, but if you’re looking for a great game to play with friends, Super Mario Party more than fits the bill. Developed for the Nintendo Switch, this is the eleventh main installment in the Mario Party series.

Super Mario Party adopts some of the classic gameplay found in older Mario games. Like a board game brought to life, there are lots of mini-games on offer to choose from including Whomp’s Domino Ruins, Megafruit Paradise and online Mariothons to compete in.

Games usually end with a thrilling conclusion when the stars are finally counted. It’s a great option to enjoy with friends and family.

Here’s another pack of different party games in one. The Jackbox Party Pack can keep you and your friends entertained for hours. Featuring plenty of mini-games to choose from, you can join in on the fun with up to ten players.

Everyone will need a smartphone, tablet or PC to join in the games which makes it an easy game to set up at any party.

Test your knowledge in games such as Dictionarium, Trivia Murder Party or Role Models - there is plenty of variety, depending on what type of game you and your friends feel like playing.

Starting off as a free web browser game, Speedrunners eventually made its way onto Xbox 360, Steam and Nintendo Switch due to popularity. This is a simple game that anyone can enjoy with friends or family.

Speedrunners is a multiplayer side-scrolling racing game where players compete against each other to outrun their opponents by using power-ups and grappling hooks. Fall behind, and your player is knocked out as the screen moves along with whoever is in the lead.

Keep Talking and Nobody Explodes

Your communication and collaboration skills will be tested in this interesting little game. Keep Talking and Nobody Explodes is designed for two players so is perhaps not the best option for larger gatherings.

This is a great little puzzle game that offers something a bit different if you’re looking beyond the usual racing or combat party games on offer elsewhere.

If you’re after a classic beat ‘em up party game, then Gang Beasts is a fun and inventive take on the genre. It features colorful, gelatinous characters who engage in slapstick fight sequences and navigate dangerous environments around Beef City.

You can customize your characters and either fight friends at a party in the gang game mode or take the fight online in the melee game mode.

The gameplay is simple and fun, you can punch, kick or try and toss your opponents over hazards in the world around you. It’s a great game to load up at any party.

There are so many party games out there that it would be impossible to list them all. These are just our top five picks we think should be on your list for your next party or meet up with friends. Most are pretty simple to learn and are a great way to pass a couple of hours with friends.

If there’s a party game that you would have loved to see on this list, please let us know in the comments below.