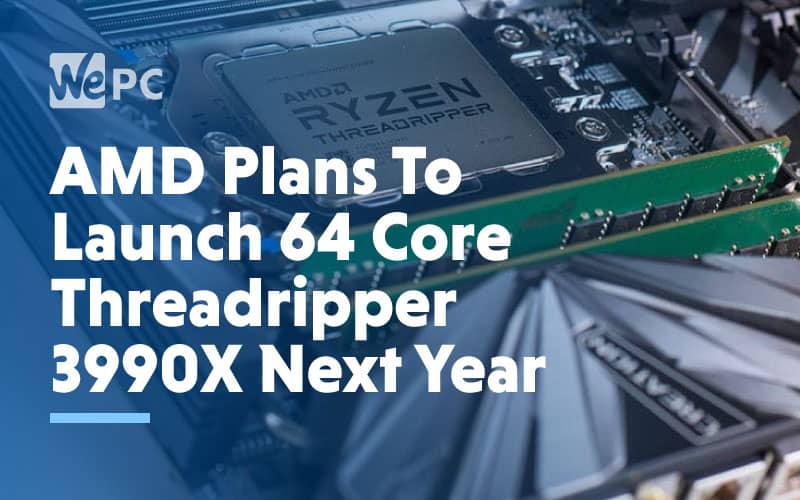 Hot on the tail of today’s release of the Ryzen Threadripper 3960X and 3970X, as well as the 3950x release, AMD has announced it is working to deliver a 64-core variant of its new third-generation Threadripper CPU in 2020.

While the chip manufacturer is understandably guarded when it comes to details about the 3990X, we know the processor will have 64 cores, 128 threads, a whopping combined L2 and L3 cache of 288 MB, and a 280 W TDP. Unfortunately, we don’t yet know what to expect in terms of base and boost clock speeds.

When Will It Launch?

As of writing, we have no information on when to expect it to launch to the public, although 2020 is almost guaranteed given the marketing tag line. Previous leaks of internal scheduling plans suggest the CPU was initially slated for a full-scale unveiling in January next year. However, given the delay to the release of the other Threadripper models, we may have to wait a little longer to know more about the Ryzen Threadripper 3990X.

As for what we can expect from the 3990X, we presume it will follow in the footsteps of its less-powerful siblings. AMD will be eager to target the high-end desktop market and users requiring performance for heavy workloads. We’re talking render-dependent tasks such as video editing, 3D modeling, data sciences, simulation, and software development.

The 64 cores (a world first for consumer-level desktop CPUs) should improve performance considerably on the already available 3970X, although by how much will be heavily dependent on how the extra cores are integrated into the architecture. What’s certain is that the 3990X will further solidify the third-generation Threadripper’s position as the fastest desktop processor on the market.