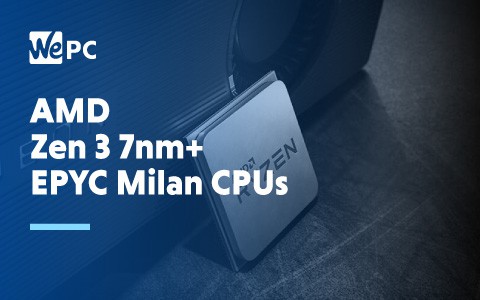 Taking to the stage of HPE Cast 2019, AMD has unveiled fresh new insight into its upcoming workstation and server-specific 7nm+ Zen 3 EPYC processors.

Known internally as ‘Milan,’ these third-generation CPUs are primed to oust the Intel equivalent Xeon processors based on 10nm and 14nm++ tech, both of the Ice Lake-SP and Cooper Lake variety. The salient point being an improved performance per watt rating than Intel’s chips.

Many of the aspects of the recently announced Zen 2 EPYC processors, dubbed ‘Rome,’ are set to feature in the Milan chips, most notably a significant boost to the core and thread count.

AMD did say it is looking to up the performance per watt features of the Milan by introducing 20% more transistors than the Rome CPU and 10% improved efficiency thanks to 7nm+ technology.

From what we understand, the first iteration of the Milan CPU will be used in the Perlmutter Exascale supercomputer with specifications tentatively revolving around a 64 core and 128 thread setup with 8-channel DDR support with a hefty 256 GB per node and AVX2 SIMD.

The Milan looks set to rival Intel’s well-publicized Ice Lake-SP and the purported headline-grabbing IPC boost of 18% that did the rounds this summer.  As always, AMD will offer this upped performance at a lower price point than Intel, further entrenching AMD’s position as a viable alternative to Intel in the server CPU landscape.

AMD has plans to launch the EPYC Milan in 2020, although it didn’t provide a more precise release window than that. Moving forward AMD is working on a Zen 4 chip, codenamed Genoa, which should see the light of day before 2022 going by AMD’s recently updated 2019-2022 roadmap.