New Data Shows AMD Outsells Intel By Twice As Much 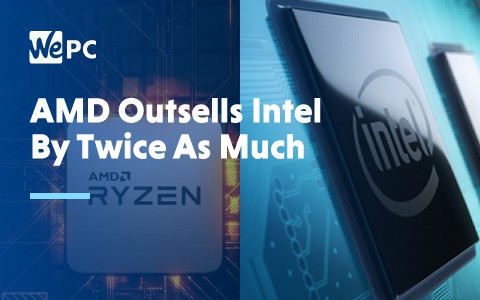 As many have long surmised, AMD is outselling Intel in terms of CPU sales, or so says a new study by German retailer Mindfactory.de based on sales figures from the past five years.

The data collected is limited to the German territory, which suggests some inherent barriers to making a statement about the global state of sales, but the sample size is nevertheless large enough to make some assumptions.

The tipping point appears to be the introduction of AMD’s Zen architecture-based products. With the release of Summit Ridge in 2017, sales have tipped exponentially in AMD’s favor, passing Intel midway through 2018 and staying on top ever since. The data shows that AMD is currently outselling Intel by double.

Mindfactory.de attributes the changing of the guard to the inherent performance improvements offered by the Zen 1 architecture. But what truly pushed the boat out was the release of AMD’s HEDT 7nm tech Zen 2 known as Matisse. With an IPC matching Intel, AMD was able to surge forward thanks to a higher core count and lower prices.

It’s interesting because HEDT chips don’t usually sell in massive volumes, but AMD has succeeded in attracting customers to a typically more expensive product, something Intel has long struggled with due to an exorbitant pricing structure. Unchallenged, the Matisse chip is selling like hotcakes, boosting AMD’s fortunes by substantially expanding the market rather than stealing shares away from Intel.

As above, this isn’t representative of global chip trends but provides insight into how successful AMD has been at clawing back parts of the market despite Intel’s long-running dominance.

Whether the trend extends to other territories remains to be seen, but the chances are that it does, and AMD has confined any doubts of it living in Intel’s shadow to the past.