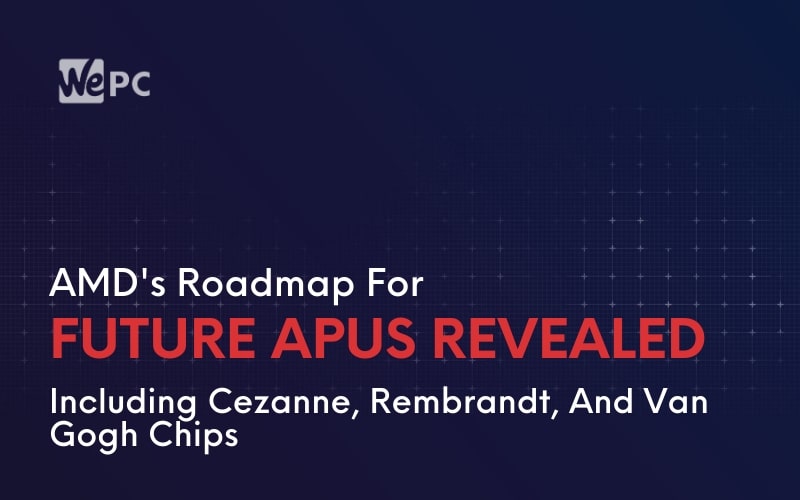 We now have a clearer picture of AMD’s plans for its upcoming Ryzen APUs. The new details come courtesy of known Twitter leaker Komachi, then expanded upon by outlet Expreview.

Firstly, we have the AMD Matisse Refresh, which, as we reported yesterday, is set to be an updated take on the Ryzen 3000-series X models, notably with the Ryzen 9 3900 XT, Ryzen 7 3800 XT, and Ryzen 5 3600 XT. These are expected this summer and will act as AMD’s core focus for this year before the chip giant turns to the Vermeer CPUs.

Shifting to the Vermeer chips, these will coincide with the Renoir Ryzen 4000G-series APUs but will have a different core design. Early signs suggest the APUs will take a hit to performance compared to the Ryzen CPUs.

Following on from Renoir, AMD will reportedly shift to the Cezanne APUs, although other code names have surfaced in various rumors in recent months. The Cezanne chips will be geared towards both the high-end notebook market and as well as the mid-range desktop consumer with an AM4 socket. Both variants will feature Zen3 architecture, while the graphics would remain rooted in Vega.

Next, we can supposedly expect the Rembrandt chips, which will ostensibly usher in a substantial update with RDNA graphics, Zen3+ architecture, support for DDR5 and LPDD5 memory, USB 4, and simultaneous support for two PCIe 4.0 devices. Rembrandt will reportedly be the first chip to use AMD’s next-gen AM5 socket, which would align with the new support for DDR5 memory.

Finally, we have the Van Gogh APUs with Zen2 architecture and RDNA graphics with AMD aiming to ship out an ultra-low-power APU to rival Intel’s Y-Series range. We could see APUs with a TDP as low as 9 W geared towards use in ultra-thin devices as well as embedded systems.

At the risk of stating the obvious, we suggest taking all this with the warranted dose of skepticism before we hear the official word from AMD.