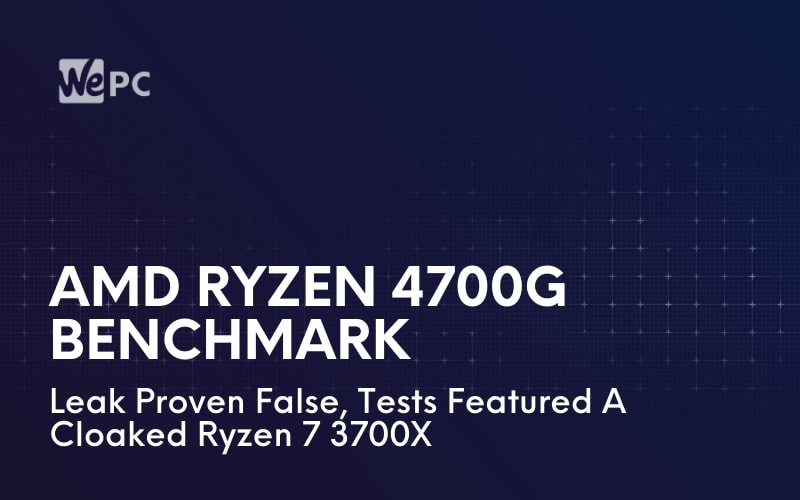 A recent benchmark for an AMD Ryzen 7 4700G may not have offered an insight into the chip many hoped it was.

It has now emerged that the chip was, in fact, a Ryzen 7 3700X cloaked as a Ryzen 7 4700G. The initial finding came courtesy of known Twitter leaker, momomo_us, who came upon the results on UserBenchmark, launching a wave of excitement due to the alleged APU’s more than impressive performance.

The benchmark suggested the AMD Ryzen 7 4700G boasted 8-core and 16 threads promising an APU that signaled a serious improvement on AMD’s existing roster. Results included clock speeds ranging from 3.6 GHz to 3.95 GHz with equally impressive results across the board.

As these things often are, it was too good to be true. According to a Twitter user by the name of Belly Jelly, the processor was an AMD Ryzen 7 3700X tricked to show up as a Ryzen 7 4700G thanks to some regedit wizardry. They were, by their own admission, ‘messing around with regedit.’ This led UserBenchmark to recognize the CPU as a Ryzen 7 4700G when it wasn’t at all the case. Jelly Belly warns that it was indeed a ‘fake’ and that people shouldn’t believe the results.

The news appears to back up claims from onlookers that the benchmark results pointed to a cloaked Ryzen 7 2700X, although even then, the speculation was off the mark.

While this is all undoubtedly disappointing for those wanting a sneak peek at the potential of the AMD Ryzen 7 4700G, it should serve as a cautionary tale that benchmark results do really need to be taken with a hefty dose of salt. The ease with which the UserBenchmark results were manipulated shows that nothing should be taken as gospel.

We’ll now have to wait patiently to hear some official news from AMD about the Ryzen 7 4700G.