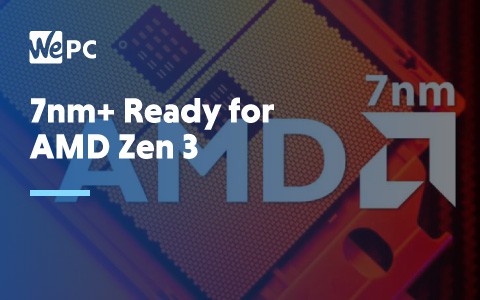 There was some good news for AMD last week, TSMC has announced that it is well on track in coping with the high volume of requests for 7nm+ chips. TSMC broke this news by announcing that it’s “delivering customer products to market in high volume” – this is great news for AMD whose next-gen Zen 3 Ryzen 4000 CPUs are expected to drop next year.

A Sigh Of Relief From AMD

This news will come as a great bit of relief to AMD who have confirmed that their next-generation Zen 3 CPUs will be specifically built on the 7nm+ node. Although the name is almost identical to the 7nm process you may have heard of, the 7nm+ (officially named the N7+) will be the first to utilize EUV patterning during the manufacturing process.

This allows for the cost of creating new chips to be reduced while still offering higher performance and transistor density. The good news for AMD is that there won’t be a delay for their new chips harnessing this technology.

AMD is said to be managing user expectations for these new chips, however. With how great the leap was that the Zen 2 chips made, it is easy to become excited.

Mark Papermaster from AMD has mentioned in the past that this time the main gains will be efficiency rather than performance. That isn’t to say there won’t be any performance gains though, Papermaster said: “Moore’s Law is slowing down, semiconductor nodes are more expensive[…]and we’re not getting the frequency lift we used to get.”

“Slowing down” is the keyword here, performance gains won’t be non-existent. TSMC is suggesting that there could be a potential 10% performance boost. The news that TSMC is hitting the 7nm+ yields isn’t meant solely for AMD though, but it’s more than likely going to be of great benefit to them the most.