It looks like we’ve finally had some confirmation on just what manufacturing process node that AMD’s hotly-anticipated Zen 3 Ryzen processors will be using. A series of investor slides were uncovered that showed a “Compute Architecture Roadmap” which clues us in to some of AMD’s future plans.

What Does the Roadmap Show?

There have been a couple of rumors lately that AMD had made a last-minute switch to a 5nm manufacturing process, but these have been well and truly disproven at this point. The information shown in the roadmap lets us know that it will be sticking with the 7nm process for Zen 3 and aiming to make the jump to 5nm for Zen 4. 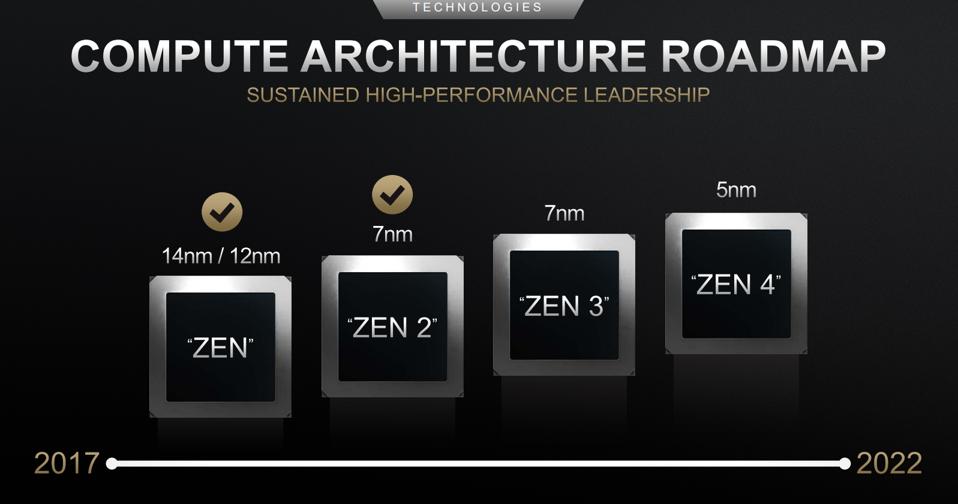 This piece of news will come as some relief for Intel, who are still using the 14nm manufacturing process in its 10th generation of processors. AMD’s 4th generation of Ryzen processors are expected to bridge the gap on Intel in some of the games where they still fall slightly short. While AMD generally wins on multithreaded focused games, Intel still has the edge when it comes to running a lot of titles.

What to Expect With Zen 3

AMD has confirmed that this Zen 3 generation of processors is going to be faster than ever before. This brand new CPU architecture will deliver significant IPC (instructions per cycle) gains, higher core counts, and faster clock speeds.

There have been a couple of rumors that point towards up to a 17% increase in IPC gains and a 50% increase in floating-point operations, which would be a massive improvement overall.

With the AMD Ryzen 4000 ‘Zen 3 Vermeer’ set to compete against Intel’s Comet Lake-S and Rocket Lake-S processors, it’s going to be interesting to see just how their performance holds up. This is going to be especially important when compared to Rocket Lake-S as this is penned to be a major architectural upgrade for Intel, albeit still on the 14nm process.

What do you think of this announcement? Do you think Zen 3 will be able to deliver even more performance out of the 7nm node? Let us know down in the comments section below.