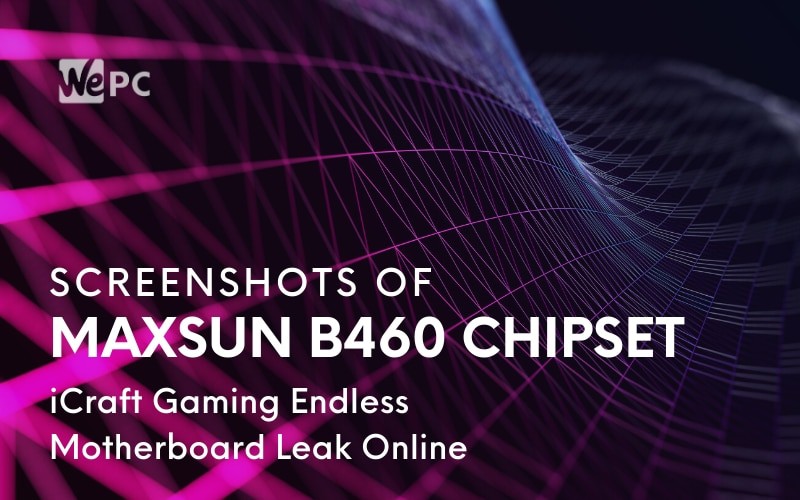 As we gear up to the release of the Intel Comet Lake-S CPUs, the first images of a motherboard featuring Intel’s new B460 chipset have leaked online. The board appears to come from manufacturer Maxsun.

The B460 chipset is understood to compete directly with AMD B550 chipset, although AMD’s roster of motherboards will offer compatibility with PCIe 4.0 and some form of overclocking, while Intel’s won’t. This remains speculative at this point, so take it all with a good dash of salt. How that will factor into which chipset consumers gravitate towards is unclear.

Maxsun has revealed the first look at its upcoming B460 iCraft Gaming Endless motherboard, which, as the name suggests, features Intel’s B460 chipset. The leaked promotional screenshots aren’t for the faint of heart with a design that we’ll describe as an acquired taste with an anime-inspired look and geared towards those wanting a showy look to their PC innards.

The images indicate the board will ship with various swappable anime graphics that you can fix on top of the PCH and VRM shrouds on the motherboard to suit your preference.

As for specifics, there isn’t much to go on from the marketing shots when it comes to specifications, but the B460 iCraft Gaming Endless appears to be a Micro-ATX form factor board and ships with a duo of PCIe x16, four DIMM RAM slots, and two M.2 slots armed with heatsinks. Otherwise, the B460 iCraft Gaming Endless seems a pretty standard fare board aimed at the mid-range market.

The screenshots of the B460 iCraft Gaming Endless show what appear to be chunky I/O buttons with the marking ‘L,’ ‘C,’ and a thunderbolt symbol.  While it’s unclear exactly what they’ll be used for, we may be looking at overclocking preset switchers, which suggests that Intel may be endowing the B460 chipset motherboards with some type of overclocking functionality.

With the Intel Comet Lake-S CPUs due out next month, it’s safe to assume we’ll be hearing and seeing a lot more of these boards in the weeks ahead.