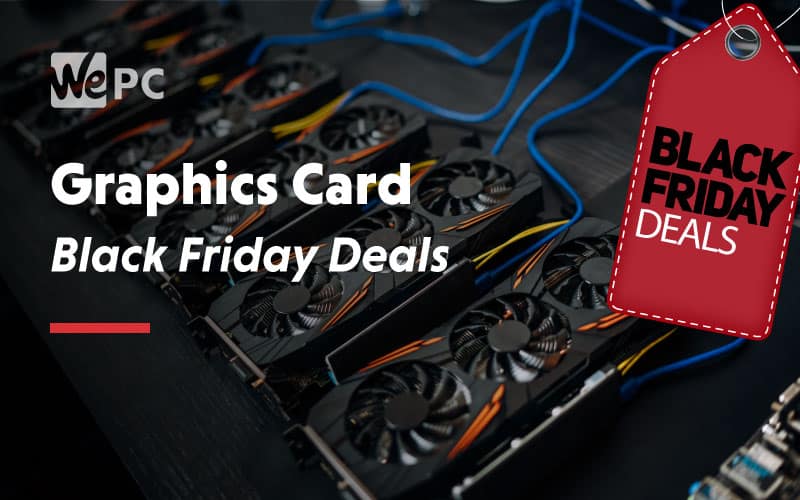 Black Friday is finally upon us and with it comes a whole host of massive discounts on this year’s best selling products! It’s the time of year where people celebrate the holiday with a long shopping spree thanks to prices being at their lowest point all year long. And guess what, it isn’t just Friday that will showcase superb offers this November. We’ll have the chance to grab a bargain right the way through till Tuesday thanks to Cyber Monday as well.

So, if you’re hoping to get a new graphics card by taking advantage of the best GPU deals, then you are in the right place!

WePC’s dedicated team of PC and gaming enthusiasts is actively scouring the internet to present you with nothing but the best, Black Friday graphics card deals available.

We also have a lot of other Black Friday and Cyber Monday deals, so check them out too:

This is where we will showcase the best deals we can find on any specific day. We update this section as and when new products go live so be sure to check back to ensure you never miss out on a top deal.

There are a bunch of cool graphics cards that we hope to see on sale this year. They range from the 2060 SUPER right up to the RTX 2080TI and everything in between. However, finding the best deal can be a tricky task and one that requires hours of research!

To save you the stress, we’ve decided to put together this comprehensive list of the best Black Friday graphics card deals we could find across the internet. You can thank us later!

Effectively, we do all the hard work so you can just sit back and browse the best deals that the internet has to offer.

Unfortunately, we’re still 10 weeks away from the big day meaning no deals are currently live. However, as soon as deals start to appear, this is the place to find them!

Here’s our guide on what we believe are some of the best graphics cards available right now GPU options.

Choosing between AMD vs NVIDIA graphics card in 2019 and knowing which is the best graphics card depends entirely on the end user’s preference. Performance-wise, the popular manufacturers have somewhat similar offerings, although Nvidia has more high-end options than AMD.

Below is a shortlist of last year’s best mid-high end graphics card deals we found on Black Friday!

Preparing for the Best GPU Sales

There are a few things you need to keep your mind on when shopping for GPUs on Black Friday and Cyber Monday.

Know your budget. Even though prices will be lower, high-end graphics cards are still expensive, especially if you’re using SLI.

Compare your current GPU to the one you’re interested in. Check our GPU Hierarchy article to know where your GPU ranks. There are also websites, like UserBenchmark, that lets you see the power difference of all graphics cards.

If you’re planning to overclock, make sure you know how to overclock your GPU. And don’t worry if you’re still on the fence as to whether overclocking is worth it or not.

Don’t forget that you can find discount GPUs outside of Black Friday deals by utilizing the used graphics card market that’s flourishing with the release of the RTX.

For people that are pretty new to the whole Black Friday craze, here is a shortlist showcasing some of last year’s best deals.

This should give you a pretty good indication of what deals we can expect this year.

Even though Black Friday is still 10 weeks away, we still like to start getting things into position to guarantee our readers get a shot at the best deals out there.

Obviously, a lot of the deals are whilst stocks last, so you have to be quick! For that reason, we’ll be updating our pages on a regular, hour by hour basis, to make sure not a single deal is missed.

This section will showcase what we believe are the absolute best deals Black Friday has to offer. We’re talking huge discount percentages, the highest monetary amount off, and the top-selling discounted products. This is the criteria list for products showing in this section.

If you’re looking for the best Black Friday graphics card deals out there, look no further, we have you covered.

You can check Amazon’s Early Black Friday Deals while also keeping our articles on tap you as we’ll be updating them around the clock to give you the best graphics card deals– and possibly even the cheapest 4K graphics card.

So, there you have it, our guide on finding the best Black Friday deals this November.

All that is left to do now is sit back and let the countdown commence!

If you’re like us, you’ll be coiled with anticipation waiting for things to kick off. Hopefully, we’ve given you all the tools you need to go out and find the best deals available.

Let us know in the comments section what Black Friday graphics card deal you’d like to see!