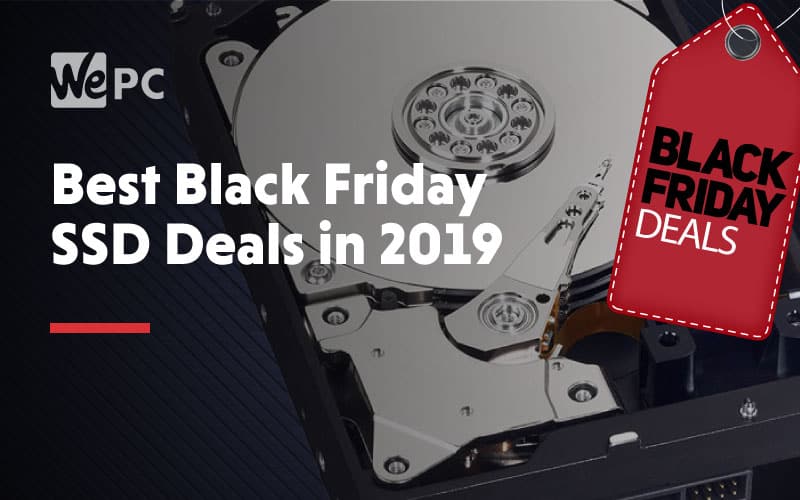 When you build a computer, whether it’s for gaming or productivity reasons, you’ll probably want to opt for an SSD. Since Black Friday and Cyber Monday are just around the corner, your chance to finally bag an SSD on the cheap has just increased dramatically.

Here at WePC, our team of dedicated writers will be staying busy hunting down 2019 Black Friday and Cyber Monday deals, and that includes SSD deals.

You can browse through our other Black Friday and Cyber Monday listings:

The demand for SSDs nowadays is becoming more widespread.

In return, SSD manufacturers are taking on the challenge of developing large-capacity SSDs. Of course, with more storage capacity comes a higher price tag. This is why events like Black Friday and Cyber Monday should be taken full advantage of.

Great deals can be found across the weeks leading up Black Friday meaning you could save yourself a pretty penny.

Here are some more offers from last year’s Black Friday and Cyber Monday.

Cyber Monday is another day in the calendar where retailers reduce the price of their stock. This means missing out of Black Friday isn’t such a big deal. You now have Cyber Monday to fall back on.

Helpful Tips to Locate the Best SSD Deals for Your Needs

Being prepared is the key to getting the best deals; this includes SSD deals. Whether you’re primarily aiming to get the best Samsung SSD deal or are specifically looking for 240GB SSD deals, setting a budget will go a long way. Not only does this help rein in impulse buys, but this also ensures you get what you really want.

If you’re browsing Amazon for Black Friday deals, making use of websites like CamelCamelCamel will surely help. You get to see the price history of the item as well as the average, highest, and lowest points.

You can also head over to Amazon’s Early Black Friday Deals to see deals from other categories.

Most people will already be fully aware of how good Black Friday deals can be. But, for those that aren’t, let’s take a look back over last year’s best deals to give the newbies a taster of what’s in store.

Below is a list of some of the best SSD deals from last year:

Where to Find The Best Black Friday SSD Deals

One of the most stressful parts of the whole Black Friday bonanza is actually locating the best deals on the day.

For that reason, we decided to make this article so you don’t have to worry.

Our team of dedicated researchers will scour the web in order to find the best SSD deals out there.

The following are a few of the sites we will use to find the best deals available:

Amazon always provides some of the best deals come Black Friday. Every year we see deals that blow other retailers clean out of the water. For that reason, Amazon will be one of our first ports of call each and every day leading up to Black Friday.

Walmart is a great place to find deals on everything from monitors to laptops. That being said, they also do SSD deals. We will be showcasing only the best deals they have to offer on the big day!

Newegg is very similar to Amazon and offers eager shoppers the chance to land a huge discount if they’re quick enough. We will have all the latest and best deals they have to offer as soon as they go live. So stay tuned.

Get the Best Deals with Us!

Our WePC team is very pumped and is actively scouring new deals day and night to ensure you’re getting the latest and the best SSD deals.

Keep tabs with us and let us know what Black Friday SSD deals you’d like to see this year!

Please enter a valid email address.
Subscribe
Please check the captcha to verify you are not a robot.
Something went wrong. Please check your entries and try again.
TagBlack FridayStorage