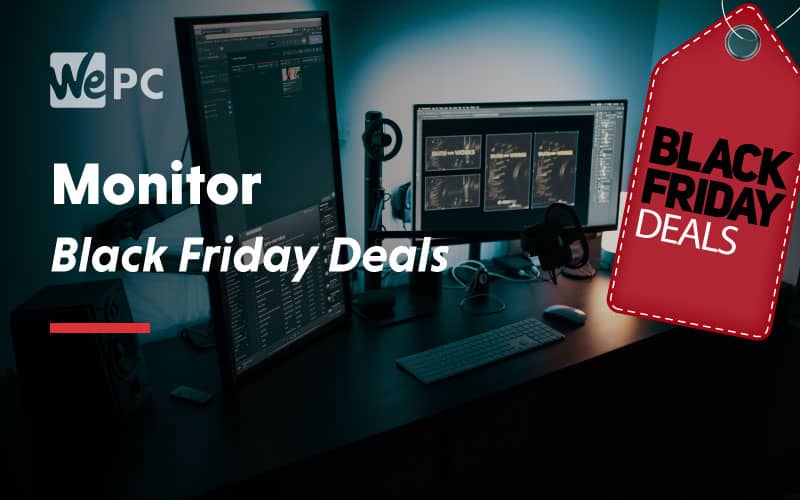 That’s right folks, it’s almost that time of year again. The time of year when retailers go crazy and slap big deals on pretty much every monitor in the market. Of course, I’m talking about Black Friday. For many, this is one of the most stressful days of the year. For that reason, we’ve put together a comprehensive list of the best Black Friday Monitor deals out there.

**Latest Update – Black Friday may have ended, but Cyber Monday is now live and plays host to some fantastic monitor deals!**

So, let’s stop wasting time and get straight into it.

Black Friday is a day where huge savings can be made on some of the top-selling products out there. Whether it’s a TV, a new laptop, an ultrawide gaming monitor, or even a gaming chair to enjoy your PC in comfort, a great deal can be found on the biggest technology sales day of the year.

However, finding that deal can be a little tricky, especially if you’re new to Black Friday shopping.

That’s why we’ve decided to put this guide together and do all the hard work for you. Let’s have a look at some of the top places to look for the biggest Black Friday monitor deals.

Our Best Gaming Monitor Deals US

Our ultrawide gaming monitor pick for the UK is the following:

Our curved gaming monitor picks for the UK are the following three:

Right now, we’re just a few hours away from the event itself. This is the place you want to check in leading up to Black Friday main announcements, as more deals are going to be going live as we approach midnight. we will showcase all the best deals the internet has to offer.

This is where we will highlight what we believe are the absolute best Black Friday monitor deals. This will be deals of over 20% off, top-selling products, and overall monetary savings.

Acer has long been known for known producing high-quality gaming monitors – but what kind of deals will see on Black Friday 2019? Last year we saw them slash some prices by more than $50 so we have high hopes.

Alienware’s G-sync monitors are always worth the investment, but here’s hoping that investment will be much lower than usual this Black Friday.

With discounts of $50 across multiple models last year, we’re expecting to see even more great discounts from AOC this Black Friday.

ASUS won the monitor deal game last Black Friday by slashing prices left, right, and center. There were discounts of up to $400 on some of their products! Let’s see if they follow suit again this year.

Another brand that brought big deals for Black Friday 2018, Dell is one to watch for 2019 that’s for sure.

We’re big fans of LG monitors here at WePC, so we’ll be keeping a close eye on what kind of discounts we can expect this year.

We didn’t see any particularly impressive deals from HP last Black Friday, so we’re hoping they change it up this year and bring some big deals to the table.

With discounts of up to 50% (which meant around $200!) Samsung offered us some really impressive deals last year. We’re keeping a close watch on what they come up with for 2019.

Finally, we’ll be looking at BenQ to see what kind of deals they produce – they were pretty middle of the road last year, so it will be interesting to see!

Bundles might include monitors and other peripheral deals which we feel are worthy of your consideration. Because what better way to celebrate Black Friday is there than a new monitor and keyboard purchase?

Lastly, we come to accessories.

This is where all the best monitor accessory deals can be found. If we feel like it’s necessary and a great deal, we’ll pop it so you can check it out.

What Is Black Friday?

If you’ve never heard of Black Friday before – where have you been hiding out? Every year, on the Friday after Thanksgiving (November 29th, this year) retailers across the globe band together to offer the best deals on their best-selling products. This usually results in some form of buying frenzy, but also means that you can get your hands on some seriously good deals on some of your top wishlist items.

How to Get The Best Black Friday Monitor Deals

Here at WePC, we’re all about finding you, the reader, the very best deals – especially when it comes to Black Friday. So, don’t spend all that time searching the web – just stick with us!

It’s also a smart idea to make a list before the day rolls around of exactly what you want and need to buy. Splitting into these two sections stops you over-spending on unnecessary stuff and ending up still needing those essential pieces for your PC build.

Where to Find The Best Black Friday Monitor Deals

So, as mentioned above, finding the best deals can be a tricky task come Black Friday.

It’s usually one that requires a shed tonne of prior research, hours of browsing numerous sites, and cross-referencing prices to make sure you’ve found the best deal! I’m starting to stress just thinking about it.

Fear not though chaps! We’re going to do all the hard work for you. All you need to do is sit back, relax, and choose the deal that most suits your needs. Before we get to the deals though, let’s take a look at some of the biggest stores we’ll be using this November.

Amazon is, without doubt, one of the biggest online retailers there is. And naturally, it has some of the best and biggest deals out there. It will be one of our first ports of call when it comes to finding the best monitor deals. Last year offered us a tonne of really impressive savings and we hope to see more of the same this time around.

Newegg is another great source when it comes to finding a cracking deal on November 29th. They offer a whole plethora of deals on Black Friday and we’ll have the best of them.

Walmart can be a little hit and miss when it comes to monitors. That being said, we’ll still make sure we showcase the best of the bunch. If there’s a deal to be found, we’ll sniff it out.

Best Buy, like Walmart, can be a tricky place to sniff out the best deals. However, our dedicated team will make sure not a single deal is missed in the build-up to Black Friday.

So there you go folks, let the countdown to Black Friday commence!

If you’re anything like me, you’ll be itching to get amongst the deals come November. If you’re looking for a monitor deal though, make sure to bookmark this page for the best deals the internet has to offer. I know, bold statement.

What Black Friday Monitor Deals are you hoping to see this year? Leave us a comment in the section below.