Diablo 4 gets the Necromancer, and end game first look and cross play and console couch coop. 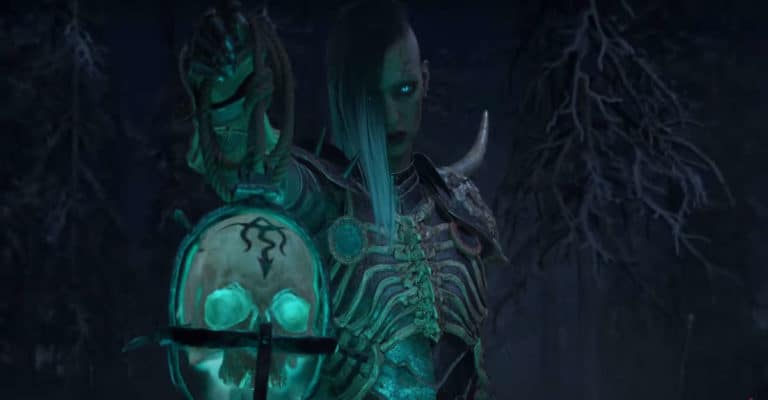 Blizzard Entertainment has announced that the Necromancer is the final class coming to Diablo 4. The Necromancer announcement was confirmed during the Xbox and Bethesda conference in 2022 and makes it the fifth and final class on the roster.

The Necromancer only got a slight trailer during the conference. It appears the Necromancer has the usual summon skeleton units, which is no doubt only the basic tease to the class. Deeper into the gameplay trailer, there is a look at the skeleton mage,s and some gargantuan monsters the necromancer can summon. There also appears to be some blood tide stuff alongside the usual corpse explosion. So far, it appears the class plays rather similarly to the Diablo Immortal Necromancer, but, there are only a few spells and effects we can see from the trailer.

In addition, the Necromancer reveal came with more stuff to the end game, and the console version of the game. Diablo 4 got a sneak peek of the end-game talent system, alongside some end-game world bosses that players can team up against. There is also so confirmation of PvP modes, crossplay between PC and consoles, and even the incision of two-player couch coop for those playing on Xbox Series X and S.

As for details, there appears to be an in-depth paragon talent system. There are plenty of points, and bridging circles that seem to change the build paths for your paragon points as you play through the end game. We also got a deeper look at the end game open-world level design, with platters running around, teaming up with world bosses, as well as map interaction, with a barbarian kicking an enemy off a ledge.

Lastly, we know that Diablo 4 is going to be a day one launch for Xbox Games Pass for both console and PC.

We also got confirmation that Diablo 4 is coming next year. There is no hard-set date, but there is a 2023 release window. Overall, it seems Diablo 4 is nearly fully fleshed out and has a lot going for it. There are still more announcements to come, but so far, it is promising to see that Diablo 4 is shaping up well. If you’re interested in the full news, the full blog post is available on Blizzard’s website.