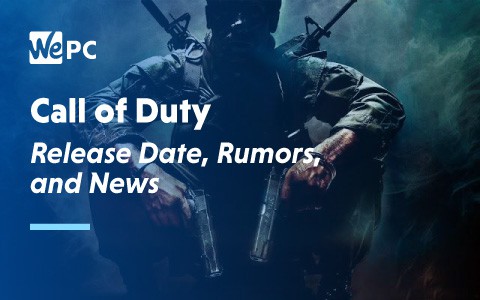 With what seems like almost yearly releases of Call of Duty, you’re never too far away from your next hit of action. Some people have already had the chance to play the latest title during the alpha held between the 23rd-25th August, which showcased the highly anticipated 2v2 mode.

If you missed this, then don’t worry, the rest of us will have the chance to do some catching up with the open beta that arrives September 14th. We don’t know for certain if this beta will have the same content as the alpha, but it would make a lot of sense to gather reactions from fans on some additional content before the final release. For those who are content to wait, the Call of Duty Modern Warfare release date isn’t too far away either.

Fans of the series will be able to play this ‘soft reboot’ of the Modern Warfare franchise soon enough. The release date for this title is penned to be October 25th as shown in a reveal trailer on the official Call of Duty YouTube channel.

The newest installment in the franchise is set to take Call of Duty Modern Warfare back to its roots. It appears that, as usual, no expense has been spared when crafting the single-player experience. Players are set to experience some of the tougher choices in warfare, some of which have been compared to those seen in the popular title Spec Ops: The Line.

With the release date looming ever closer, we’re already gearing up our PC builds to make sure they meet the system requirements needed for such a graphics-heavy game.

What We Have Seen so Far

Everybody that plays a Call of Duty title knows that the majority of time is going to be spent in multiplayer. This year the gameplay looks to be as frantic as ever! From a series known for its heart-pumping gunplay, we expected no less.

With the game being released on Xbox One, PS4 and PC on October 25th we’ll finally be able to see how it all plays out. No doubt there will be post-release patches but the initial state of multiplayer is always unmissable. We already have some confirmed information on weapons and killstreaks, but seeing how they are balanced for the general audience is always interesting.

With all the information we have seen so far we can’t wait to get our hands on this title and truly see how it matches up to its predecessors. Will it surpass the original Modern Warfare title or fall short?

Infinity Ward has set themselves a tough task in matching the nostalgia we all have for those games, but if this game is as good as it looks, it could be the revamp the series sorely needs.

Of course, releasing under basically the same title as one of the most popular Call of Duty games sets the bar high, but it’s looking like this title has the content to match it.

What do you think? Let us know your initial impressions of the game once it’s released on October 25th. Will this title be your go-to shooter for 2019?