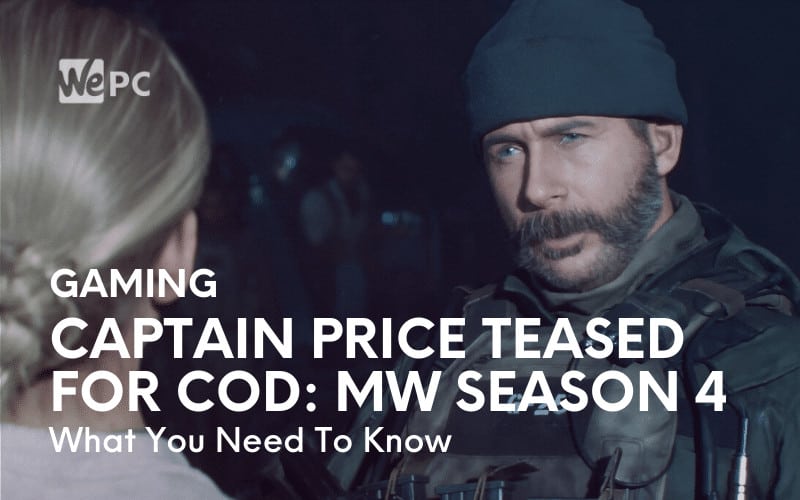 In anticipation of Call of Duty: Modern Warfare and Warzone’s upcoming Season 4, publisher Activision and developer Infinity Ward have released teasers hinting at the return of an iconic ‘old friend’ from the franchise and senior operator – Captain John Price.

Teases started with a cryptic notification pushed out to owners of the Call of Duty Mobile app earlier this week, hinting at some form of event or announcement on May 21.

Yesterday, this was followed by a marketing email containing a link to an intercepted recording of ‘confidential’ communication between what appear to be well-known Call of Duty characters, Khaled Al-Asad and Vladimir Makarov, stylized into a teaser video on the Call of Duty website.

You can check it out below, and witness other characters cower at the mere suggestion of the arrival of this mysterious new operative.

‘’On MAY 19 at 2337 Zulu, Armistice SIGINT intercepted flash traffic from AQ regional command outside Verdansk. Message calls for a priority call with an unknown. Suspected recipient is TARGET DENVER. Surveillance activity has been authorized.’’

Although the video doesn’t outright name the fan-favorite character, it contains a brief glimpse at Price’s signature hat courtesy of a grainy intelligence photograph. Anyone familiar with the Call of Duty franchise will immediately recognize the British captain’s favored headwear, leaving little doubt as to the operative’s identity.

The intercepted chatter also refers to the mysterious operative as a ‘big’ problem, which certainly matches Price’s description if his previous Call of Duty cameos are anything to go by.

With the return of Captain Price all but confirmed, we can expect him to feature in the Season 4 Battle Pass in some form, more than likely as a playable operator.

When does Season 4 arrive? It looks like a matter of weeks with the beginning of June standing as the most likely release window. Alongside Price, players can look forward to brand new content such as multiplayer maps, new weapons, skins, operators, Warzone game modes, and possibly some changes to the free-to-play battle royale’s Verdansk map.

Expect Activision and Infinity Ward to push out a Season 4 roadmap shortly before it starts detailing all the planned content for the months ahead.