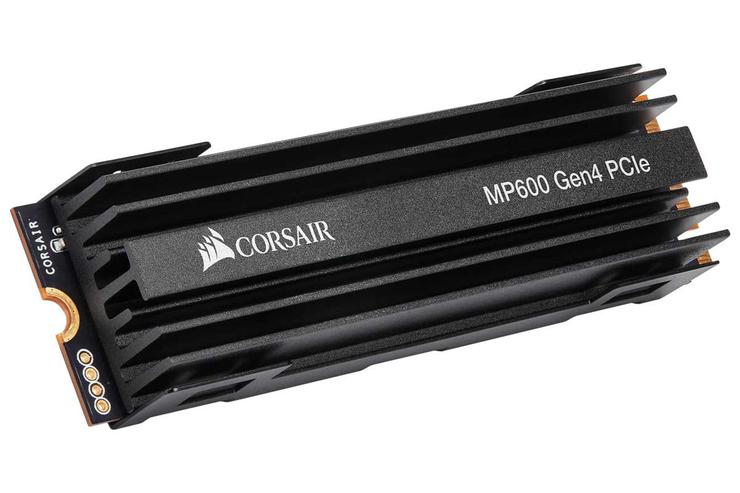 Among other exciting announcements from Corsair at Computex 2019, the manufacturer is diving headfirst into the potential of the new 3rd-gen AMD Ryzen chips and is offering one of the very first PCIe 4.0-ready SSDs, the Force Series MP600, heralding in a new era of ultra-fast SSD speeds.

The storage solution is purported to reach read speeds just shy of 5GB/s through full use of the additional bandwidth provided by the PCIe 4.0 M2 standard. Write speeds are expected to hit a more than respectable 4250MB/s.

The MP600 manages speeds that measure in at upwards of 12 times the speed of current SSDs through an NVMe interface and Phison PS5016-E16 controller alongside 3D TLC NAND memory. Capacity wise, expect 512MB to 2TB models though Corsair has yet to provide specifics. As for compatibility, the Force Series MP600 fits into a PCIe 4.0 x4 M.2 slot with manufacturers lining up to unveil compatible motherboards.

A peek at the design and the chunky heat sink mounted on top of the MP600 does raise some questions. Is it imperative due to the heat dissipation requirements of such a fast SSD or has Corsair decided to inject some aesthetic flair to boost sales? Either way, it looks the part.

Corsair has yet to shed any light on how much we’ll need to fork out to become a proud owner of an MP600, but details are expected soon for a launch date close or matching that of the new Ryzen CPUs.

Such blistering speeds naturally command a high price, and as such, the Force Series MP600 is expected to target the high-end enthusiast market.