In a shocking last-minute move, the official release of gameplay footage in the run up to the release of Crysis Remastered has been canceled. The previous release date of July 23rd has also been abandoned, with the new release date currently planned to be “a few weeks” later. Crytek says that this is intended to help them polish the game up more.

There was an early leak of the gameplay trailer, that we discussed when it happened yesterday. Crytek appears to have confirmed the veracity of that footage, and in response to negative feedback have now decided to work on the game some more so they can release a trailer that they are more comfortable with sharing.

This is a strange situation, especially given the source of the “leaked” trailer footage. It wasn’t the result of some kind of hack or data breach, it was a trailer that Crytek themselves will have uploaded to the Xbox storefront. This suggests that at one point at least, they were happy with how it presented the game. The video footage to me looks like it might have been through more than one pass of video compression. If it was compressed to be uploaded to the Xbox store page, then again when uploaded to youtube, that could perhaps explain the slightly muddy look. Beyond that, it looked very much just like Crysis to me. 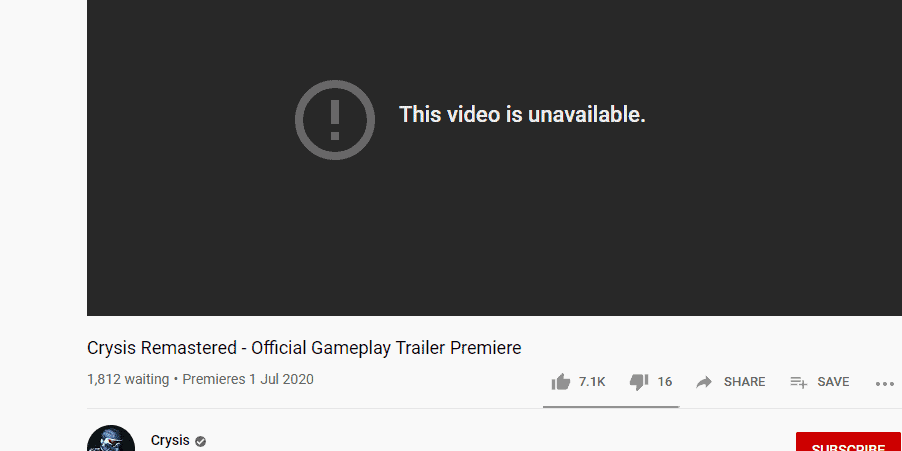 A lot of the disappointment stems from the fact that very little seems to have changed visually from the original release of the game. It was a fantastic looking game back then, and still holds up well, but I think many players were hoping to see more obvious improvements given the advances in PC hardware since it’s initial release, plus the various different advanced graphical techniques that have shipped in many games since then.

Crytek have issued this statement on the decision, which raises as many questions as it answers:

Feels kind of like they’re making their plan up as they go. Any major shortcomings exhibited in the leaked footage are perhaps tied to fundamental decisions with how they’ve approached this remaster from the start. Is a couple of weeks worth of additional polish really going to move the needle in that regard?

They also say that they’re not ready to talk about “the storefront”. It’s not exactly clear what there is to talk about. Have they perhaps taken a Tim Sweeney special and agreed to go Epic Store exclusive with this remaster? Perhaps might this launch first on their own store which they’ve expressed a degree of ambition for? I wasn’t really worried about this aspect of the release until they casually mentioned it in this statement.

The jury is still out on exactly how this Remaster is going to play out. Is it going to be the comprehensively rebuilt for modern computer hardware that the game deserves, or is it going to be a perfunctory repackaging of a beloved old game, without much in the way of changes? It makes sense to develop a version of Crysis for systems like Xbox One, PS4 and Switch that have never had a native version of this game, but Crysis has been on PCs for years now, and I think players on PC can reasonably expect that Crytek would put effort into ensuring that this remaster lives up to it’s potential, rather than squanders a bunch of the goodwill that this series has rightly earned up til now. It feels like had this footage not been uploaded to the Xbox store page early, the release of the remaster would be going ahead on the originally planned schedule. I very much wonder how the conversations surrounding this decision have played out behind closed doors.

Crysis Remaster is coming out “a few weeks after” July 23rd, and we’re more curious than ever how this release is going to pan out.