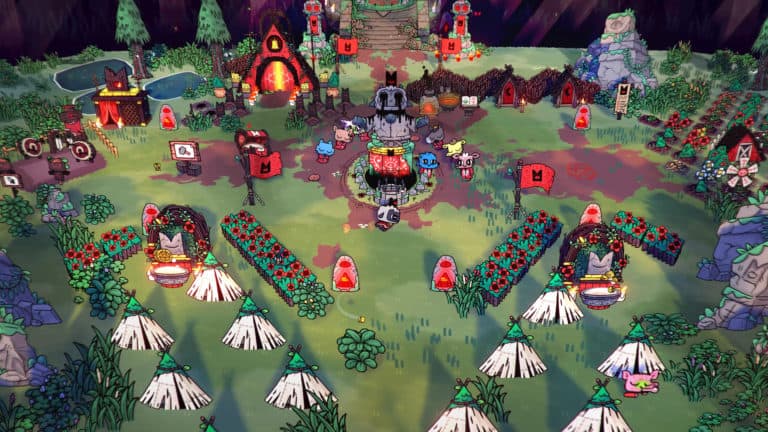 Table of Contents hide
What is Cult Of The Lamb?
When Does It Release & On What Platforms?

There’s some big releases coming later this year from Devolver Digital. One of those games is Cult of the Lamb, an upcoming roguelite that is aiming to steal the crown (no pun intended, not that anybody reading this would actually get the pun right now) of games such as The Binding Of Isaac: Repentance, Hades, Dead Cells and a whole host of other games that we could name here. But when does the game release? What platforms is it releasing on? Hell, what IS it? Read on and find out.

What is Cult Of The Lamb?

Cult Of The Lamb is a new action roguelike with base-building elements and base-control elements in which you have to make your small and growing cult as happy and placated as possible. There’s actually a demo available right now if you want to try it out for yourself. The Steam page for Cult Of The Lamb states the following when discussing the game:

“Cult of the Lamb casts players in the role of a possessed lamb saved from annihilation by an ominous strange, and must repay their debt by building a loyal following in his name. Start your own cult in a land of false prophets, venturing out into diverse and mysterious regions to build a loyal community of woodland worshippers and spread your word to become the one true cult.”

Cult Of The Lamb defines itself as being about three things. Building your flock, destroying the non-believers and spreading your word. Building your flock means that you’ll be tasked with collecting resources around the world, giving sermons that make your followers worship you and taking part in various different dark rituals to appease the gods and make sure they don’t send down vengeance upon you. Destroying the non-believers will involve travelling across a massive randomly generated world and beating up huge hordes of enemies in addition to other cult leaders. As you do so you’ll be spreading your word, creating the most unstoppable flock ever and discovering the four regions. By the time you’re done the entire world will worship you as if you’re their god.

The game is looking to take the crown of roguelites from titles such as The Binding Of Isaac: Repentance, Hades and Dead Cells by introducing unique gameplay elements such as the aforementioned base building and management options. You’ll have to feed your cultists to make sure they remain happy and don’t turn on you and overthrow you as the leader of your cult, and give them various different bonuses as you do so. It’s also got a beautiful artstyle that helps to put it above some of the competition, but that’ll mean nothing if the gameplay isn’t good, which it luckily is.

When Does It Release & On What Platforms?

Cult Of The Lamb is currently scheduled for release 11th August and is releasing on PC (with a demo currently available), Nintendo Switch, PlayStation 4, Xbox One, PlayStation 5, Xbox Series X, Xbox Series S and MacOS. Play the demo now and work out whether or not you’re fit to run your old little cult.