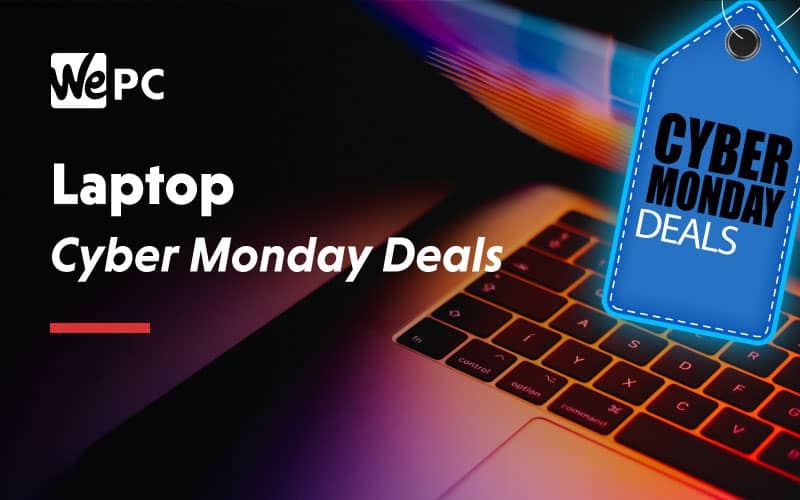 Finding the absolute best Cyber Monday laptop Deals is a pretty stressful task. Browsing a tonne of websites, researching numerous products, and cross-referencing deals can certainly take its toll after a while.

Well, fear not, that's where WePC has decided to lend a helping hand.

We've decided to compile a list of what we believe are the best Cyber Monday laptop deals so that you don't have to go through the strenuous process yourself. I know, we're good like that.

This can be your one-stop-shop for everything laptop related come Cyber Monday.

So sit back and enjoy browsing the best Cyber Monday laptop deals the internet has to offer!

Back when Black Friday was in its early years, shoppers would have to physically get out of bed and go down to their local store if they wanted to get a piece of the discount pie. Not many retailers would tackle the online market.

However, this didn't last too long. Cyber Monday didn't take long to get off the ground and became a huge hit with online shoppers thanks to massive deals on top-selling items.

It hasn't changed that much since then, it has only gotten bigger. For that reason, we're going to cover the biggest and best retailers to make sure we find you the best deals out there.

Right now, we're still 10 weeks away. I know, bummer.  That means retailers haven't started to put early deals on yet. However, as soon as the deals do start to hit shelves, this is the section where they will be showcased.

The deals that will fall under the top deals section are ones that showcase the greatest savings. They will also be the top-selling products as well.

It isn't just laptops that will be showcased in this thread. We will also be making an effort to include mice, keyboards, software, webcams, and so on. If we feel that a product is relevant to laptop users, we'll make sure it's in here for your consideration.

Where to Find The Best Cyber Monday Laptop Deals

It can be a stressful process finding deals come Cyber Monday, especially when every retailer under the sun is providing deals.

Amazon is by far one of the biggest online markets when it comes to finding the best Cyber Monday deals. From a laptop point of view, Amazon is a great place to start looking for deals. We saw a tonne of deals last year and hope for similar levels this time around.

Walmart has been offering great deals on laptops for a good while now and is in real competition with other big retailers when it comes to top deals. We will have all the best deals come December 2nd, so make sure to keep your eyes on this post.

Newegg has been growing in authority for years now and always seems to offer some superb deals on one of the biggest tech sales days of the year. Its one of the first places we will be checking on the lead up to Cyber Monday.

Best Buy is very similar to Walmart in that historically most of their deals were done in-store. Thanks to high demand, however, we now see their online store filled with Cyber Monday deals. We hope to see plenty of laptops for the big day and will have all the best deals below.

Let's take a look at some of the best deals Cyber Monday 2018 had to offer. This should give us a good idea of the kind of deals we can expect from this year's event.

Below is a small selection of 2018 savings:

Over the years we've found hundreds of great deals for our returning readers. In that time we have definitely seen trends form, like brands that provide the greatest saving and so forth.

For me, the best deals always come from brands like Apple, ASUS, Acer, Dell, and HP. They always seem to discount their top products, some as much as 30% off. That being said, we'll have all the best deals from the biggest providers on the big day. So watch this space.

Cyber Monday is the brother to Black Friday and another day in the calendar where massive savings can be made. Finding the best deals on offer is something we specialize in. So sit back, and enjoy what we believe are the best Cyber Monday laptop deals this 2019.

All The Lenovo Legion Products At CES 2020