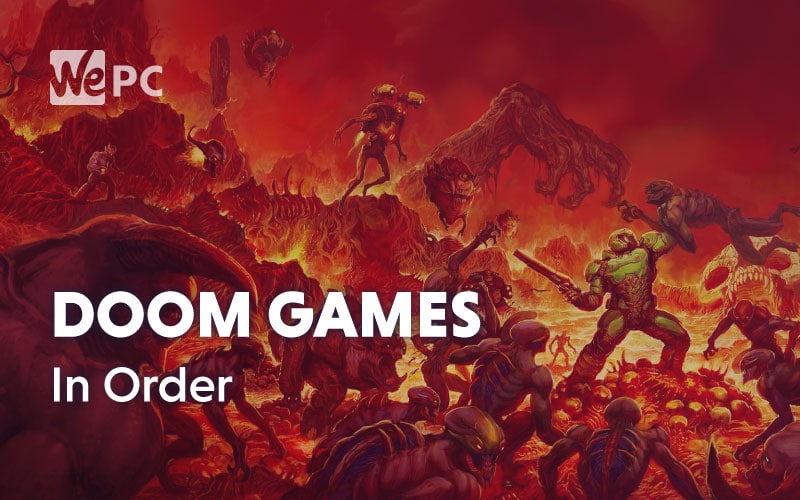 With the release of DOOM Eternal today across the globe, we decided to take a trip down memory lane to look at all the DOOM games in order from the original back in 1993 all the way up to today.

DOOM is one of the most iconic video game series, with a discography spanning 27 years and still going strong. This FPS classic has seen many titles throughout its lifespan, and will hopefully have many more to come. So, without further ado, let’s take a look at all the DOOM games in order.

Almost everyone I know has played the original DOOM game at some point. For me, it was back on the PlayStation, and I distinctly remember physically dodging the bullets so much that I fell off my chair. Sad to say, I still dodge and jump in real life when I play FPS titles.

The game was something of a technical marvel back when it first released thanks to the complexity of its 3D backgrounds. Of course, we’ve moved on leaps and bounds when it comes to gaming graphics now, but there’s still something magical about this classic.

The game has recently been re-released onto newer consoles, so you can download today and relive the memories. I’ll admit though, playing the original DOOM on my Nintendo Switch Lite has been an interesting experience.

DOOM II didn’t experience as wide-reaching a release as it’s predecessor until it was brought to the 8th-gen consoles and smartphones we have today. This game was, as the name suggests, a sequel to the first game. And, like the original title, there was little in the way of plot. Instead, the game focused on the basics of FPS – shooting things.

With this installment, we did have our first introduction to the Super shotgun, though, as well as a whole new roster of enemies to shoot with it. A worthy member of the DOOM alum.

A whole ten years after DOOM II, we finally got our hands on DOOM 3. With those ten years, developers id Software managed to do some serious work on upgrading the 3D backgrounds they had become famous for, bringing us a much-improved graphics experience.

Unlike its two predecessors, DOOM 3 placed a lot more emphasis on the story aspect of the game, which was not met with a smile by everyone. The game was slower-paced, more difficult, and had much more of a horror slant to it. The main issue was the darkness of many of the levels, forcing players to use a handheld flashlight to see their enemies. The problem? You couldn’t hold the flashlight and a weapon.

Despite this, it still met with largely positive reviews and still makes a worthy title in the DOOM franchise.

Thankfully, we didn’t have another decade to wait before the next release. Less than a year after DOOM 3, we got the expansion – Resurrection of Evil. It mostly added a quicker pace and brighter rooms. It quickly became an essential purchase for those DOOM fans who had issues with the gameplay aspects of DOOM 3.

It also brought with is some new guns and new enemies for our hero to defeat. The most notable of these being the Grabber – similar to the Gravity Gun from Half-Life 2.

We had to wait another seven years until we got a new DOOM game, and even then all we got was a remaster of the least popular title. This version brought updated graphics and included both the base game and the Resurrection of Evil expansion. It neatly fixed the biggest issues with DOOM 3 and added in some extra content. This helped it feel like a new game more than a remaster, but fans were still left wanting more.

Learning from their mistakes with DOOM 3, DOOM (2016) picked up the pace in a big way. The game takes place on Mars and the Doomguy you’ve been playing all these years has been given a promotion. He has now been elevated to the mythical “Doom Slayer” and he’s here to stop a demonic invasion taking over Mars.

In terms of gameplay, this title introduced new weapons, power-ups, enemies, movement options, and brought us brand new “glory kill” finishes. This game is, hands down, not just a jewel in the DOOM franchise, but one of the best FPS games of all time.

And that brings us to the latest release – DOOM Eternal. In this sequel to DOOM (2016), you take up the mantle of the Doom Slayer once again, but this time, we’re heading to Earth. As DOOM (2016) worked as a reimaging of the original game, DOOM Eternal does the same with DOOM II.

There’s more time and effort put into the story of this game, and they’ve introduced some nifty new weapons as well as mechanics, enemies, and environments. The game is faster, more aggressive, and more visceral than previous installments, and we can’t wait to complete it.

The game dropped at just the right time as well – with the world taking precautions against Coronavirus, Doom Eternal is just one more way for gamers to make the most of their time in self-isolation.

This completes our list of all the main titles in the DOOM franchise. But, it doesn’t stop there. There have been a number of spin-offs for those looking for even more DOOM content. These range from a VR version of DOOM (2016) to DOOM Pinball (yes, really). So, there really is something for everyone. And who knows whats next, with DOOM Eternal having just launched we are in no doubt that the next entry into the franchise is being worked on right now for the new Playstation and Xbox consoles – and we can never get enough of that DOOM action!

Which is your favorite DOOM game? Let us know in the comments below, and be sure to head over to the WePC Community when you playthrough DOOM Eternal too!