We got a closer look at Forever Skies gameplay thanks to the FGS. 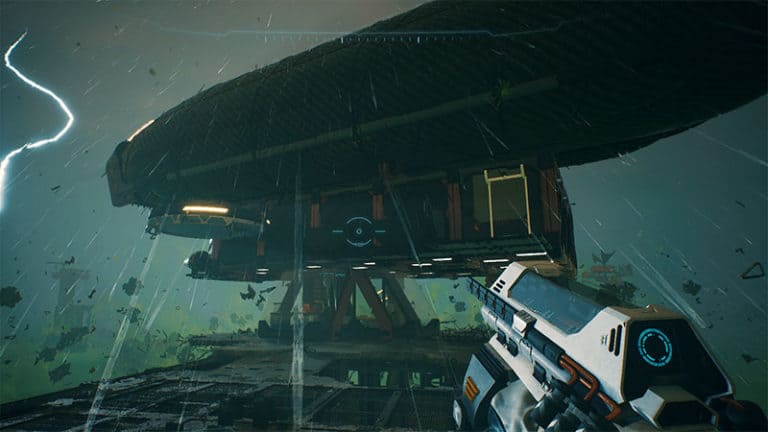 Forever Skies is an upcoming sci-fi exploration game, mixing first-person survival gameplay. You return to a devastated Earth after an ecological disaster. You’re one of the few who got off and can return the ship with your airship. The title was announced a few months back, allowing us to see how the ForeverSkies gameplay works.

One of the key features of the Forever Skies gameplay trailer featured a dynamic weather system. The player inc control was tasked with needing to fly above the dust cloud on the planet. This appears to be one of the facets of the planet’s life that players will have to avoid, making them approach their challenges in the game differently.

In one instance of the trailer, the character is off doing its scavenging. However, it appears that there is a lightning storm, one that attacks its airship‘s engine. The player then has to cool one of the p[oroppelents don, otherwise, the ship will tumble down to the earth and be lost in the void of the planet.

In addition, we got a closer look at the airship gameplay. At the start of the trailer, there were clips of a fully functioning airship, with oxygen and other vital information to your character’s survival. No doubt these features will require you to upgrade your ship so you can bypass other hazards and explore now parts of the decaying husk of the planet.

Oh, and there appear to be sensors on the planet that detect large unknown lifeforms. There are mysteries to solve as to why there are beasts that can survive ecological disasters. More importantly, why do you need a detector to help inform your decision based on these unknown creatures?

If the Forever Skies trailer gained your interest, why not take a look at the Steam Page and wishlist, ready for more information when it goes live?