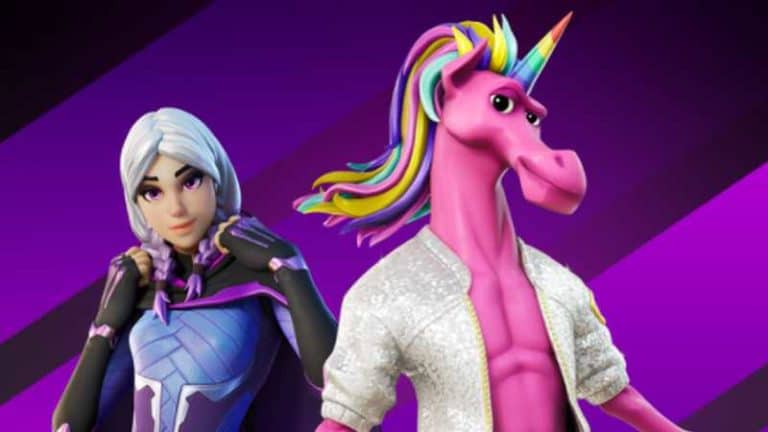 October 12th, 2021, saw another large update to Fortnite’s Season 8. New combat weapons and much-needed changes to the current quest system were among the highlights of the patch notes, but the spotlight truly belongs to a long-overdue credit to InnerSloth.

The new combat SMG and combat Assault Rifle have been announced, but are not playable in-game just yet. This is because they make up the latest round of the war effort, an in-game vote for the next weapon to be added to the Battle Royale loot table. In order to vote in the war effort, take some hard-earned gold bars to a Donation Board during a match, and cast your vote.The first of the two to be “100% funded” first, gets added to the game.

The difference between the combat class and existing ARs and SMGs is a more direct bullet spread, increased power, but stronger kickback. These are weapons that need taming, but are worth the effort.

It won’t have gone unnoticed that quests have undergone a huge upheaval in Season 8. Among the most notable changes were the repeatable shared quests – with very low XP payout. They almost weren’t worth doing unless you completed them by coincidence, with XP from just 500 to 750. These have been hugely increased in 18.20 to make them slightly more worth the effort.

Ever since Epic Games introduced the Among Us influenced Imposters mode in August, it has felt like something was missing. Voice chat functionality. While you could choose from a selection of predetermined accusations and defensive statements, it’s still a little hard to make your point heard without being able to speak. This changes with v18.20 with the introduction of voice chat in Imposters.

Alongside the added voice chat capabilities, Epic Games have also added a role bias option the the mode. You’ll now be able to tell the game whether you’d prefer to play as an Agent or an Imposter, and you’ll be more likely to be placed in your chosen role in both Public and Private matches, though of course it won’t be guaranteed.

Finally, and possibly most importantly/surprising, Epic Games have finally accepted that they were inspired by Among Us to make Imposters. No surprise there. Among Us creator InnerSloth was credited in the Fortnite 18.20 patch notes, as well as on social media.

In yet another huge announcement, the widely criticized Boundless skin has been reintroduced to competitive playlists. Boundless is a customizable superhero skin, which was found to be verging on pay-to-win as they could be built to be either fully white or fully black, both of which had significant advantages in game, allowing players to hide within the map.

Epic have announced that the skin is now allowed in competitive matches once more, following some alterations to lighting and shading.

Epic have clearly addressed a whole list of fan requests for this update, as they have also started to roll out a new Stay with Squad option. Something players have been crying out for since time immemorial, Stay with Squad will allow players to stay in a duo, trio or squad they have been matched with for multiple games in a row.

Stay with Squad is currently only available if you are playing on the NA-East server region, but will be rolled out globally in the future.

Full Fortnite v18.20 patch notes can be found at epicgames.com.