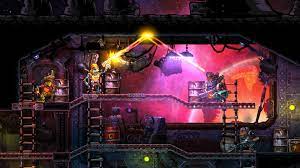 Table of Contents hide
SteamWorld Galore
What are these new games?

SteamWorld HeadHunter was revealed back in November as a third-person action-adventure title, and is expected to launch in 2023, along with two titles revealed in their latest financial results report that are listed as only “Strawberry” and “Coffee”. No details are currently known on these two titles beyond the codenames that they have been given, so we can likely expect reveals within the next few months at the series of events that will be taking place. Strawberry and Coffee are listed before HeadHunter in the provided development timeline which raises questions about when the games are actually going to release.

This raises questions as to whether or not we’ll see the games at Summer Games Fest, or if Thunderful will opt to reveal the games in a separate and individual capacity in an attempt to make sure all eyes are on their reveal and not torn between seventeen-thousand other reveals.

What are these new games?

SteamWorld Strawberry is listed as being a puzzle game that is currently in development for mobile, SteamWorld Coffee is listed as a city-building game for PC and Console and SteamWorld Caramel is listed as being a turn-based tactical shooter and strategy game in development for PC, Console and mobile. The series is known for changing genre between releases, with the series covering a huge amount of ground, but what is shocking is the fact that there’s currently as many games planned to release within the next two years as Thunderful has released in the last nine years.

As previously mentioned, we don’t know anything about these three games beyond the genres and a release year.