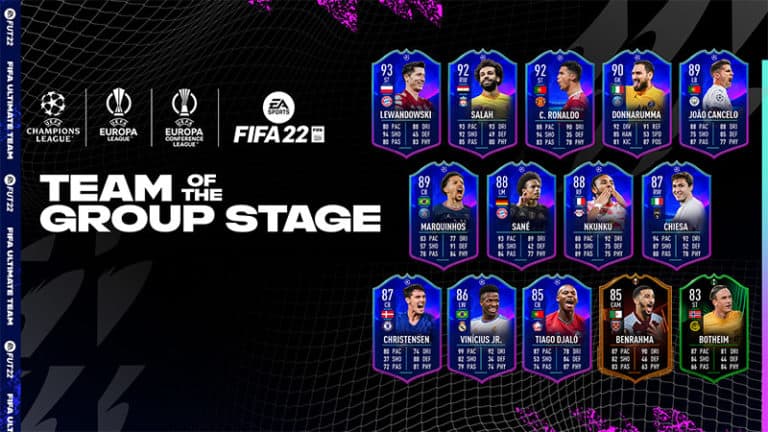 The latest FIFA 22 Ultimate Team promo has just been released and it sees confirmation of ‘Team of the Group Stage’ from across the UEFA Champions League, Europa League, and Conference League.

The players have been nominated thanks to their performances throughout the Group Stages of each European competition and the team has some huge names included, with four players rated 90 overall or higher.

Bayern Munich striker Robert Lewandowski is the highest-rated player included in the squad at 93 overall. Lewandowski has been handed a one-point upgrade overall from his regular gold card with his pace, shooting and dribbling all being boosted by two. The two-point uplift gives the Polish forward a massive 94 shooting.

Elsewhere from the Premier League, Cristiano Ronaldo and Mohammed Salah each have cards rated at 92 overall. Ronaldo was a pivotal figure in United’s Champions League Group Stage results having scored in all five games thus far, including winners against Villarreal and Atalanta. Egyptian forward Salah has scored five goals in Liverpool’s Group Stage campaign. PSG’s Gianlugi Donnarumma is the final player rated at 90 overall.

In addition to Lewandowski, the Bundesliga is well represented with wide-players Leroy Sane and Christopher Nkunku also included. Nkunku’s Team of the Group Stage card sees him move to right-forward as opposed to a central attacking midfielder for which his Player of the Month was positioned.

Team of the Group Stage:

Napoli striker Victor Osimhen is the player up for grabs from the Team of the Group Stage via the objectives and you’ll need to complete four relatively straight-forward tasks to add him to your club.

The 22-year-old scored in Napoli’s opening three Group Stage fixtures in this year’s Europa League, including a second half double against Leicester City.

Osimhen’s 86-rated card is rated three higher than his Team of the Week he received earlier in the season and is extremely well-rounded for a striker. The Nigerian has a blistering 94 pace alongside impressive stats of 86 shooting, 82 dribbling and 87 physical meaning he will be a menace for any defence.

In order to obtain Team of the Group Stage Victor Osimhen you will need to complete the following objectives: