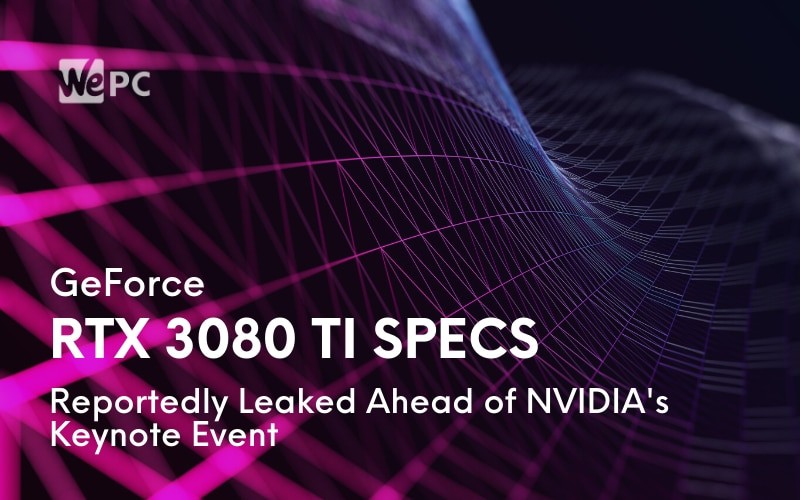 With a little over a day before NVIDIA GTC keynote speech where the company is expected to unveil the Ampere GPUs, a new leak has shed some light on what we can expect from the flagship GeForce RTX 3080 Ti. The fresh insight comes courtesy of a new video from YouTube channel Moore’s Law Is Dead.

The video ostensibly offers a first detailed look at the specifications of the GPU and how it will compare to the existing line of RTX 2000-series Turing GPUs.

Additional features of the Ampere SKUs include NVCache, DLSS 3.0, RTX Voice, Tensor Memory Compression, and NVENC 8K 60 fps support through H264 and H265 codecs. These should improve frame rates and reduce load times for games that make use of the technology.

Compared to the flagship Turing GeForce RTX 2080 Ti, the GeForce RTX 3080 Ti will up bandwidth by over 40%, a rasterization performance of 40% to 70% when running at 4K, and a 10% IPC improvement. Overall, Moore’s Law Is Dead reckons a 50% performance boost across the entire 3000-series range over 2000-series is on the cards.

Moore’s Law Is Dead also notes that the GeForce RTX 3070 and GeForce RTX 3060 should offer boost clock speeds up to 2.5 GHz, but may encounter CPU bottlenecks when running at lower resolutions like 1080p and 1440p.

On the Ray Tracing front, Moore’s Law Is Dead estimates the Ampere GPU won’t feature more cores, but instead will process intersections faster by a magnitude of four times, aided by more SMs, a higher Tensor core count, and bigger L2 cache. The video suggests even the low-end SKUs will include RT cores.

Moore’s Law Is Dead also shed some light on the release schedule for the GPUs, with NVIDIA planning to launch HPC models by the end of this month and consumer models from September onward.

In the same video, Moore’s Law Is Dead also briefly touched on AMD’s Big Navi GPUs stating that clocked samples only offered a performance boost of around 10% on the current GeForce RTX 2080 Ti, but that this should increase significantly to the point of matching Ampere GPUs for the real thing. As such, we could see a tussle between AMD and Intel to claim the top spot as the company with the best performing card.

While a pinch of salt is always warranted when scrutinizing these types of information dumps, we don’t have long for NVIDia to confirm the details are genuine or off the mark. Tomorrow’s GTC keynote should reveal NVIDIA’s plans in detail. Tune in from 6 am PT.