$10,000 Gucci Xbox Series X announced – Here’s what you get for your money

To be fair, it does come with TWO controllers 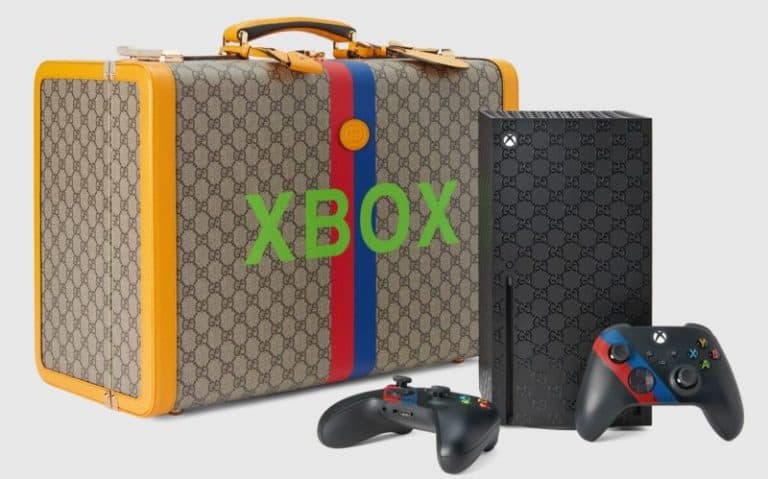 We are no strangers to limited edition consoles, they arrive frequently and are usually centered around a AAA game release and have thematic designs that appeal to the hardcore fans of the franchise in question. The newly announced Gucci Xbox Series X is a bit different.

The limited-edition collaboration will span only 100 units so if you’ve got the cash, you’ll have to be quick to snap up one of the most derisively designed limited edition console releases we’ve seen in recent years. thankfully you get more than just a standard Xbox Series X for your money, this is anything but standard.

The Italian Luxury fashion brand announced the collaboration a couple of days ago and it’s already dividing the gaming community, Twitter replies range from intense compliments and requests for a free one, to some fairly harsh criticism. Some users have slammed the company for charging such a high price for a console that continues to be hard to find in its normal form due to the ongoing semiconductor shortage.

What comes with the Gucci Xbox Series X?

For your $10,000 you get thankfully more than just the console. The package comes with a specially designed Xbox Series X, covered in the iconic GG logo, in fact, Gucci actually states that via the application of the logo to the console it takes on a new meaning of ‘good game’ a phrase used by gamers for decades to congratulate opponents and teammates, or sarcastically deride their performance. The package also includes two controllers, outfitted in a fetching blue/red stripe design, and an Xbox Game Pass subscription, but we aren’t sure yet how long it will last. given the price, let’s hope for at least a year.

Of course, the most compelling and striking feature of this whole collaboration is the carrying case. Everything mentioned earlier comes enclosed in a suitcase plastered with Xbox and Gucci branding that holds it all for convenient transport or showing-off purposes.

How can I get a Gucci Xbox Series X?

The limited-edition run of Gucci Xbox consoles will release on November 17. It’s not yet clear how exactly the ordering system will work, but we suspect a queue of sorts. It’s also suspected that some will go out to influencers for publicity purposes leaving it uncertain how many of the 100 will be available for consumer purchase. If you’ve got $10,000 to spend, it might be worth picking up as a collector’s item.