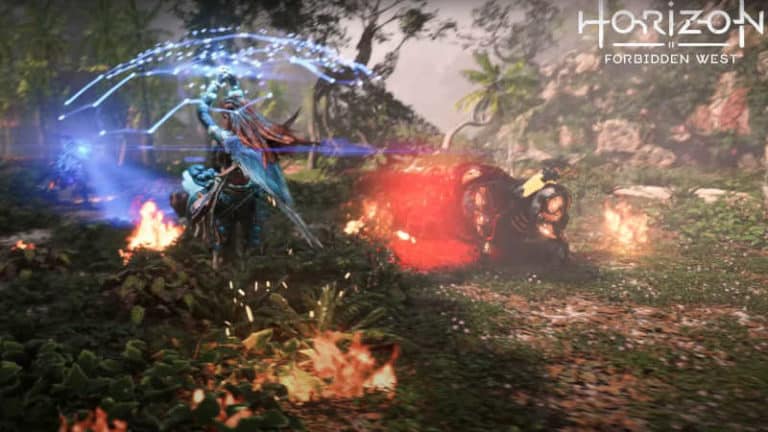 PlayStation Asia’s YouTube channel has revealed an all-new Horizon Forbidden West PS4 gameplay trailer. The new PS4 gameplay trailer shows off the quality that players still on PS4 can expect. Meanwhile, it also shows off some interesting gameplay features, and some quick combat to showcase the technicalities and gameplay aspects.

The Horizon Forbidden West PS4 gameplay trailer shows Aloy running around with her bow. She runs into a field with giant robot Warthogs, and she begins to fight them. The gameplay reveals that she can jump in the air, take slow-mo shots and aim at the enemies at the same time. In addition, it appears these robot warthogs have giant gas tanks around where their Gluteus Maximus muscles will be (well-played devs, well played). Shooting Aloy’s arrows into them cause the robots to self destruct with propane explosions.

Moreso, we got a look at a slow falling hi-tech umbrella. Apparently, the devs wanted Aloy to be Mary Poppins, gliding around the battlefield with an umbrella capable of slowing her fall. Lastly, in the final scene, we got to see Aloy mount some form of robot Velociraptor. It’s interesting, considering we got a glimpse of these robot dinosaurs in another gameplay trailer before the new year, which featured new jungle biomes and dinosaur-like creatures.

For anyone interested in taking a closer look at the Horizon Forbidden West PS4 gameplay trailer, we have embedded it below.

Expect more of these Horizon gameplay features and reveals the closer we get to launch. Horizon Forbidden West launch. For those wondering, the game arrives on Feb 18, 2022. You can take a closer look at any pre-order or version bonus through our handy guide by clicking the link.