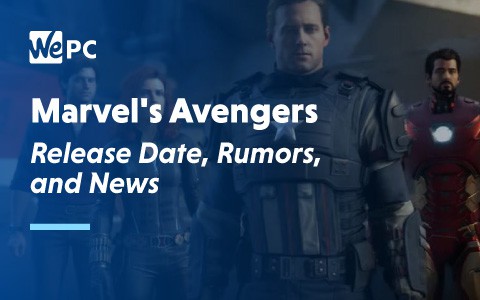 Marvel’s latest Avengers installment took the box office by storm earlier this year. It’s left a lot of us wanting more and the upcoming Marvel’s Avengers game might just do the trick. How well Marvel’s world will translate into the gaming world is left to be discovered. However, we have a Marvel’s Avengers release date and some thoughts on what the game has to offer for fans of the Marvel universe.

This new release will be available to play on PC, Playstation, Xbox One, Nintendo Switch, and Google Stadia.

A trailer was released earlier this year at E3 2019. You can see the cinematic trailer below which gives us a taste of the action:

Fans of the movie franchise, and of course the comics, may be wondering what the story behind this game will be. We know that this is a brand new story and that it doesn’t fit into the Marvel Cinematic Universe – a similar move taken by Insomniac Games when they released Marvel’s Spider-Man.

Marvel’s Avengers is set on Avengers-Day, a celebration in San Francisco where the superheroes are set to unveil their new headquarters. Also on deck is their new heli-carrier which is powered by an experimental energy source called the Terragen Reactor.

As you might imagine, the phrase “experimental energy source” doesn’t usually end well! This soon leads to the Golden Gate bridge taking damage from a series of explosions from assailants trying to get their hands on the new tech. The Avengers try to battle them but end up going into hiding after the explosions are blamed on them.

Five-years after these events, there emerges a new threat that the Avengers must regroup to defeat.

The gameplay looks to be as action-packed as you’d expect from a lineup of superheroes. There’s a focus on combat, explosions, and of course, allowing players to have a go using the abilities each of the Avengers characters are famed for.

You will be able to play as each of the Avengers characters including Captain America, The Hulk, Thor, Black Widow or Iron Man.

This footage had a lot of people sighing in relief after the cinematic trailer was accused of looking somewhat stunted. In the gameplay trailer, however, the combat looks fluid and shows off a range of impressive fighting moves that fans of Marvel will surely appreciate.

Crystal Dynamics, the lead developers of the game, promises a cinematic and character-driven game with third-person single-player and co-op. There’s also an online component with four-player squads with extra customization options.

After a promising 19-minute gameplay trailer, we’re excited to see how the game will turn out for next year’s release. We’re also hoping it’ll scratch the itch for those of us who are fans of the MCU’s Avengers series.

Are you looking forward to playing Marvel’s Avengers? Do the trailers look promising to you, or are does the gameplay look like it’s “missing something” as some people say?