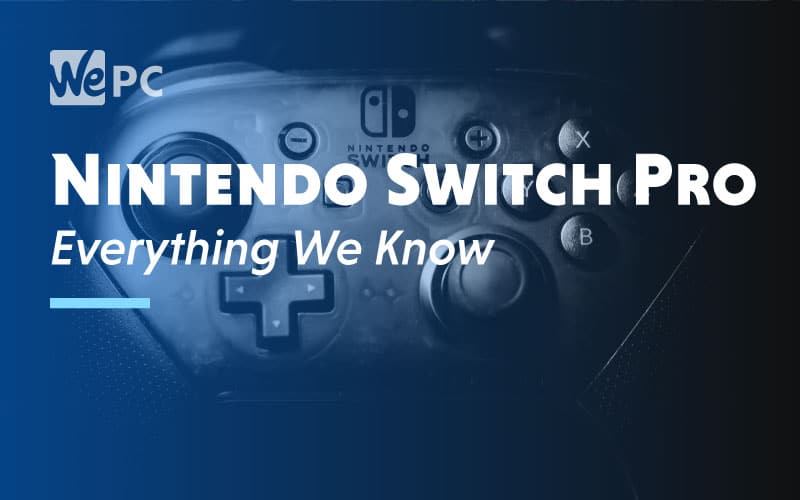 While we may be PC lovers at heart, we have a big soft spot for the Nintendo Switch.

When it was rumored that Nintendo would be making a Switch Pro model, we got very excited. While there isn’t much solid information out there yet, here is everything we know about the Nintendo Switch Pro so far. We’ll make sure to keep updating you as and when we hear more, but for now, on to what we know!

At the moment, we don’t have much in the way of confirmation for the Nintendo Switch Pro, so a release date has not been announced yet.

If we had to hazard a guess, we’d expect this to release in the same window as the PS5 and Xbox One Series X. This could be late 2020 at the earliest, but more likely 2021 as it looks like production hasn’t begun yet.

Some rumors state that production is to start in Q1 of this year, with a release expected mid-year but there’s little confirmation so that should be taken with a pinch of salt.

With the upcoming Xbox One Series X confirming its dedication to backward compatibility, we’d be very surprised if Nintendo didn’t decide to follow suit. Historically, Nintendo has been very favorable towards its older titles, with even original Gameboy games being available on the Nintendo 3DS.

With the original Nintendo Switch not having backward compatibility, Nintendo did try and make an effort to release ported versions of fan-favorite titles such as Mario Kart 8 Deluxe. We don’t yet know if this will be a similar trend with the Nintendo Switch Pro, but as it seems like an upgrade rather than a whole new system, we’d expect and hope so.

Backward compatibility aside, we’d expect all the latest and greatest Nintendo titles to be available on this new console. There are a couple of standout titles that Nintendo fans can’t wait to get their hands on.

It’s expected that games such as Animal Crossing: New Horizons, Gods & Monsters, Metroid Prime 4, and the Legend of Zelda: Breath of the Wild sequel will all make their way to the Nintendo Switch Pro at some point.

As the Nintendo Switch Pro hasn’t been confirmed yet officially for production, it’s hard to say what the specs will look like. Rumors have pointed to a new and improved chip so far, but there’s some debate on whether it builds on the previous Tegra X1 chip found in the Switch Lite or something new entirely.

A New And Improved Chip

Last summer, Nintendo made some improvements to the standard Switch hardware, opting to use the chip found in the Switch Lite for the standard models too. This meant greater power efficiency and less energy consumption across both models.

What does this have to do with a Nintendo Switch Pro? It means that Nintendo has the potential to improve on what their current models can offer. This could possibly lead to the Nintendo Switch Pro featuring further improvements to its hardware when it comes to power and efficiency.

However, another recent rumor turns this assumption on its head. It’s looking like the Nintendo Switch might not use the Tegra X1 chip after all. The rumor suggests that Nintendo is closely working with Nvidia to build a custom chip. This Nvidia processor will work alongside a GPU based on Volta architecture.

The rumors, unfortunately, hint that if this is the case, it’s unlikely to have 4K support. For those looking to play 4K games, this will be a big disappointment