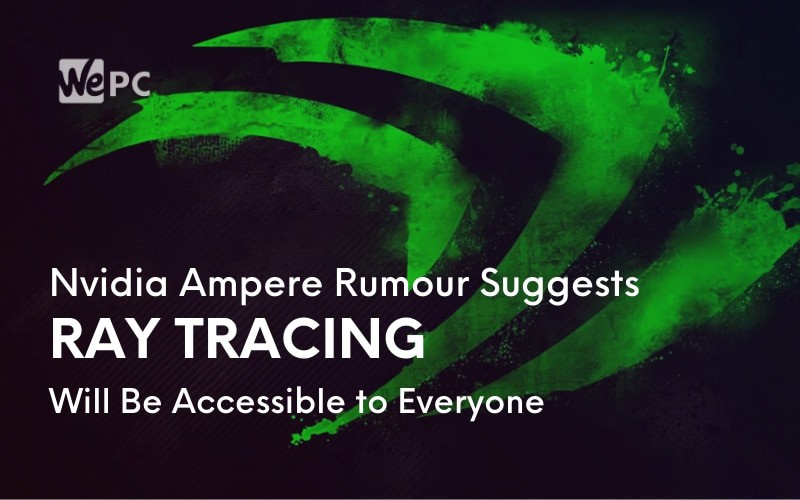 In the lead up to the announcement of the upcoming Ampere graphics cards, the rumor mill appears to be working overtime.

Barring any further delays, we should hopefully get an idea of what Ampere is set to have in store for us when Nvidia CEO Jensen Huang takes center stage at the GTC keynote on May 14th. This was seemingly confirmed in a not-so-cryptic message where Huang took the time to personally invite everyone to the event and saying “You won’t be disappointed”.

We’ve heard from a couple of rumors that the first Ampere machine is already nearing a release. Twitter user Komachi has already spotted the DGX A100 trademark which was filed at the end of March. This details a machine that uses the next-generation of Ampere based graphics cards.

It appears the GA100 GPU will be the first Ampere-based graphics silicon which will be released for the new generation. This will help power professional workstations that are compute-centric.

Nvidia DGX machines aren’t a new thing though. Since the days of the Pascal architecture, we have seen multiple versions that have included up to 16 V100 GPUs to give the greatest compute power performance possible. Obviously, these are nowhere near the reach of the average consumer with some models selling for as high as nearly £400,000!

A recent leak from the YouTube channel Moore’s Law Is Dead claims to have a whole wealth of information on the upcoming Ampere project, courtesy of an inside source at Nvidia. It’s a fairly long watch, but one of the main points to takeaway is that Ampere is set to be both a professional and a gaming architecture.

Ray tracing capabilities are supposedly set to be four times greater than what we’ve seen so far on the Turing architecture. It could eliminate the large performance hit that we see when it is enabled. This release has also been likened as the ‘real deal’ with Turing GPUs being called ‘test platforms’ for ray tracing.

Apparently, when we see its release, the potential of an RTX 3060 GPU could achieve ray tracing at the same level as an RTX 2080 Ti which would be an incredible step up in value. It was also claimed that GTX could be no more and that RTX will encompass the whole line of graphics cards, bringing ray tracing throughout the lineup.

However, these are merely rumors at this point with nothing solid to back them up. What we do know is that Ampere will have a strong focus on ray tracing and we will likely hear more on May 14th.

If you’re interested in Ampere graphics cards, be sure to check back often. We’ll be sure to keep you up to date with any more rumors or news that we hear regarding Nvidia’s Ampere as soon as we hear it.