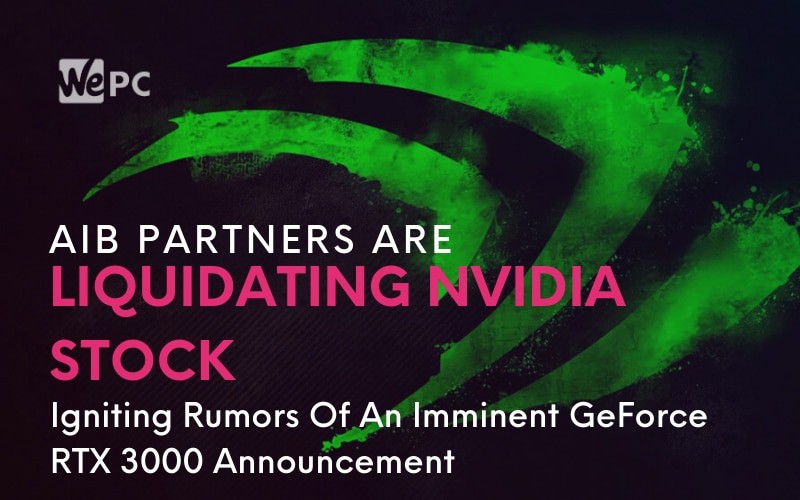 With rumors about NVIDIA’s next-gen GPUs seemingly appearing weekly, notably about the Nvidia GeForce RTX 3080, it can be taxing to sort the wheat from the chaff. But, we may have received the clearest indication yet that something is brewing up at NVIDIA HQ.

Fresh reports suggest that add-in board partners are hard at working liquidating their stock of existing NVIDIA GPUs to make space for the supposedly upcoming launch of NVIDIA’s Ampere cards in the months ahead.

The news comes courtesy of China Times, who’ve since deleted the offending article. The report explains that AIB partner manufacturers based in Taiwan, notably Asus, have implemented some serious discounts on their stock of NVIDIA Turing cards. By way of example, the Asus has slashed the price of its GeForce RTX 2060 down to around $330.

As it stands, the rumor mill is set on NVIDIA bringing the Ampere GPUs to market sometime from July onwards. This would allow ample time for partner manufacturers such as Asus to sell any remaining stock in anticipation of Ampere GPUs flooding their warehouses in Q3 2020.

The same China Times article also hinted at a similar launch format as the Turing cards. In particular, the initial Ampere offering would consist of three cards, namely the GeForce RTX 3080 Ti, GeForce RTX 3080, and GeForce RTX 3070. The GeForce RTX 3060 would then follow a few months later. Doing this would follow the pattern established by NVIDIA when it pushed out the RTX 2080 and RTX 2070 variants in September 2018, before launching the RTX 2060 in January of the next year.

As always, we recommend approaching all this with a hefty dose of salt. Short of NVIDIA spilling the beans, this all remains very much in the domain of speculation. Fortunately, we might not have to wait long to find out if rumors of a May NVIDIA event are to be believed.